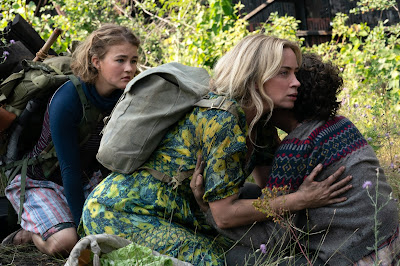 When A Quiet Place came out, I think a lot of people were surprised by it. I certainly was. I didn’t expect something like that to come out of the guy who became the central character of The Office. It’s a solid movie, though, one that, giving us a standard horror movie premise of giant monsters attacking the world, manages to present us with a story that is new in a lot of ways. A substantial amount of the tension comes not from the creatures themselves, but the threat of the creatures. They have shown to us as having hypersensitive hearing, and so the entire world of the film is one of silence and dread. This is very much continued in A Quiet Place Part II.

We start with a flashback, not a flashback to the original film, but a flashback to the history of this world. We see the arrival of the creatures, which means that we’re going to get a cameo from John Krasinski as Lee, the father of the family in the original film and this sequel. The action begins at a baseball game. Lee’s son Marcus (Noah Jupe) is at the plate and takes a strike because of what he sees. And then all hell breaks loose. The creatures land and begin attacking. We see Lee and his wife Evelyn (Emily Blunt), protecting their kids and getting to safety.

On the surface, Evelyn is the main character of these stories, but it’s actually daughter Regan (Millicent Simonds). Regan (and Millicent) is deaf, which is both a blessing and a curse in a world where sound is the enemy. She may not know what sounds she is making, but it also gave the family a huge advantage in the sense that they knew sign language at the start of the alien invasion. In the first movie, Regan learns to use her cochlear implant as a way to defend against the creatures, something that will naturally be a major plot point in this film.

We pick up immediately from the end of the last film. With their house on fire, the Abbott family needs to be on the move, something made more difficult thanks to the birth of a new child. Looking for a new place to go, the family eventually comes to an old steel foundry, currently the location of Emmett (Cillian Murphy), a friend of the family from before the attack. The property is heavily booby-trapped, and when Marcus steps on a bear trap, things get very dicey. Eventually, everyone gets to relative safety, and Emmett tells the Abbotts that they can’t stay; he doesn’t have enough supplies for them.

This is also when the Abbotts hear a radio signal playing “Beyond the Sea.” Emmett is convinced that this is essentially meaningless, but Regan does a little work and figures out where the signal is coming from—an island about a day’s walk away. She heads out alone to try to find the island, figuring that the frequency from her cochlear implant can be used to weaponize the signal. Finding her gone, Evelyn begs for Emmett to go after her.

A Quiet Place Part II does a lot of things right. Horror movie fans know that you should never split up the group (something that your average D&D player knows as well), which means that we will have to find a way to legitimately do that. Regan going off on her own is the start of this. Evelyn needing to go to the nearby town to find medication to prevent Marcus’s leg from getting infected is another. The film moves between these three groups seamlessly, showing us what is happening in each place, and moving from point to point.

It’s also smart enough to sometimes give us Regan’s perspective. In the opening scene, there are several parts that are entirely without sound. Things happen around us suddenly because we don’t have any aural warning of them. It’s a smart way to drive home what this is like for her.

What really works here, though, is the shift in tone. A Quiet Place was about immediate survival. It was about the Abbott family doing what they could to live life as normally as possible in a world that was suddenly made terrifying and frightening. A Quiet Place Part II is about survival in a much broader sense. It’s not about the family surviving, but about humanity finding a way to survive and fight back. The shift is a subtle one, but also a necessary one. The original film is stark and bleak, but that’s appropriate for the world we are given. This sequel is about something like hope.

Cillian Murphy is a great addition to the cast. I would have liked more of Djimon Housou, but honestly, that’s true in general.

Why to watch A Quiet Place Part II: A great continuation of the first movie.
Why not to watch: Not a lot, honestly—fans of the first will like this one.