Ten Days of Terror!: Tales from the Darkside: The Movie

Film: Tales from the Darkside: The Movie
Format: DVD from Sycamore Public Library on the new portable. 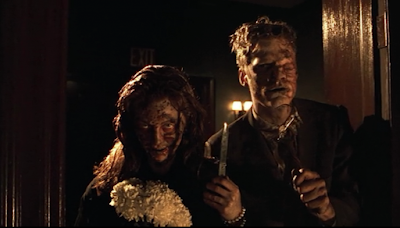 At least this time I knew it was going to be an anthology, so I’m not going to go through my normal rant about how horror movies seem to be in a symbiotic relationship with anthologies. Tales from the Darkside: The Movie is the big-screen spinoff of the 1980s television series started by George Romero. The show was a darker, more violence-tinged version of The Twilight Zone or The Outer Limits. Rather than being bent toward psychological thriller, Darkside was generally straight horror, with monsters and supernatural beasties abounding. And so, the movie is going to lean in that same direction.

The good news is that there are just three stories here, plus the short framing story. Our framing story involves a woman (Debbie Harry), who is preparing for a dinner party. It’s soon evident that her main course is Timmy (Matthew Lawrence), a young boy she has captured. Timmy, hoping to delay her, tells her scary stories Arabian Nights-like from a book she has put in his cage. After each, we jump back to the framing story for a moment as Timmy’s fate gets closer and he starts to narrate his next tale.

With only three stories, we should get a decent running time for each. Unlike an anthology that tries to cram too many pieces into running time or gives us a bloated running time, Tales from the Darkside is manageable. That would be even better if the stories used that extra space to do something more interesting than just set up the moments that end in one character or another being killed.

The first story is Lot 249. I’d love to say there are similarities here to a couple of tales from Creepshow and Creepshow 2, but this was based on an Arthur Conan Doyle story, so it has the pedigree. A college student named Lee (Robert Sedgwick) and his girlfriend Susan (Julianne Moore! Her first big-screen role!) cheat a poorer student named Edward Bellingham (Steve Buscemi!) out of a scholarship. Bellingham, knowing he was set up, reanimates a mummy to kill both of them, but Susan’s brother Andy (Christian Slater) figures out the scheme. Things don’t end well for most of the cast.

The next story, Cat from Hell, is based on a Stephen King shot. An old pharmaceutical magnate (William Hickey) hires a hitman (David Johansen, also known as Buster Poindexter) to murder a cat. Turns out, the death of the cat is worth a cool $100,000. The old man is convinced that the cat has killed three people in his household, and that the cat is a curse. One of his most profitable pharmaceuticals used cats in the development, and he is sure that this cat is back for revenge.

The final story, Lover’s Vow, concerns an artist (James Remar) who witnesses a bloody murder by a creature in an alleyway. He is sworn to secrecy—the creature promises to let him live if he never says a word to anyone about what he saw. Shortly thereafter, he meets a young woman (Rae Dawn Chong), and the two are immediately a couple. Shortly thereafter, the artist’s career takes off. And then, on their tenth anniversary, he decides to tell her about that terrible night.

As with all anthologies, the stories are hit or miss. In this case, I think they decrease in quality as they go on. Some of that might just be nostalgia. Seeing a young Steve Buscemi and Julianne Moore in literally her first big-screen role is a blast. But it really is the most interesting story because it’s also the story that doesn’t end in the way I expected once it started. The second story is fine, if a bit silly. The third one feels just mean. It’s a downer, and it detracts from a movie that up to that point was fun.

If I’m honest, though, the most fun here is not the stories, but the cast. That first story in particular is loads of fun specifically because it includes Julianne Moore and Steve Buscemi years before anyone knew who they were and Christian Slater a few months after he hit big with Heathers. How great is it to see them like this?

Tales from the Darkside: The Movie is a little thin and insubstantial and it turns dark (and not in a fun way) in the third story. But for what it is, it was a lot of fun.

Why to watch Tales from the Darkside: The Movie: A few bona fide stars in their very early years.
Why not to watch: The last story is just mean-spirited. p>

Email ThisBlogThis!Share to TwitterShare to FacebookShare to Pinterest
Labels: comedy, fantasy, horror, John Harrison, Tales from the Darkside: The Movie