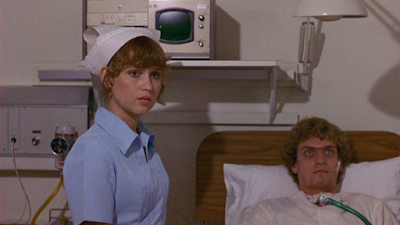 Typically, when I watch something that I know is going to show up on this blog eventually, I have a general sense of what I want to write. Sometimes, it takes me a little bit longer for me to put my thoughts together. And then, we have a case like Patrick where I’m in danger of being forced to watch it again because I have almost no thoughts on this movie aside from the fact that as a horror movie it isn’t scary and as a science fiction movie it is painfully stupid. This is seriously one of the dumber movies I’ve recently come across.

It’s worth noting that I’m not alone in this. In the late ‘70s, Siskel and Ebert had a short-lived featured called “Dog of the Week” where they would each pick their least-favorite movie of a given week. Patrick was one of Siskel’s picks one week. Truthfully, I tended to agree much more with Ebert than I did with Siskel, but I can’t fault his review of this one.

We open the film with Patrick (Robert Thompson) killing his parents for some reason by throwing a heater into the bathtub they are sharing. Flash forward three years and we discover that Patrick is in a coma, and evidently has been since he fried his folks. We learn this because Kathie Jacquard (Susan Penhaligon) is applying for a position as a nurse in a private hospital in Melbourne. We also learn that she is going through a separation from her husband Ed (Rod Mullinar) and that the matron of the clinic (Julia Blake) is a hard ass.

Anyway, Kathie’s assignment at the clinic is essentially to monitor Patrick, who does nothing but lie in bed with his eyes wide open. Except, of course, that that’s not entirely the case. Patrick, you see, has developed psychic abilities. Specifically, he’s telekinetic. We learn this through a variety of things that he does. He eventually condescends to talk to Kathie through a typewriter in his room that she uses to type up reports.

So why hasn’t the plug been pulled on Patrick? Because the guy in charge of the clinic, Dr. Roget (Robert Helpmann) is trying to find the exact point between life and death, and Patrick is his test case. Hence the monitoring, hence the expensive equipment, hence the constant supervision. Also, because we need some sort of sex here, we’re going to give Kathie a love interest in Dr. Brian Wright (Bruce Barry), who shows up to give us some medical information, have sex with Kathie at least once, and then, essentially, vanish for the third act of the film as if he never appeared in it at all.

At least some of this sounds like it would make a decent enough movie, no? So where does all of this fall down? For starters, the film isn’t consistent in what it tells us or wants us to believe. We don’t really know the extent of Patrick’s abilities. He’s able to almost drown Brian in a swimming pool that is likely miles away from the clinic. How did he know Brian was in the pool? He had Kathie essentially type a letter from him. How? She’s physically typing, but it’s his words. Did he take over her mind? None of this makes any sense and comes from—as many a bad turn in a poorly-written film does—plot necessity rather than from the characters or from coherent and consistent world building.

Have you guessed, by the way, that Kathie is young and attractive? Have you guessed that Patrick has decided he is in love with her? Will it shock you to learn that he’s going to force her to choose between another man and him? To go back to Siskel’s review of this, what person in their right mind would choose Patrick? Especially since his method of communication apart from the typewriter is spitting, one spit for yes, two for no.

And so, Patrick is powerfully dumb. It doesn’t live within any sort of parameters it sets for itself because it doesn’t really bother to set any parameters for itself at all. The characters are dumb, act in dumb ways, and nothing happens that makes sense beyond the plot needs of the moment. Worst of all, for a movie that calls itself a horror film, it’s not scary. None of this is explained from the first moment—we don’t know why Patrick killed his parents, wound up in a coma, or gained telekinetic powers beyond “he’s lost his other senses, so now his sixth sense is compensating.” It’s clearly a case where someone had a nugget of an idea (guy in coma has psychic powers) and couldn’t figure out how to get there.

Why to watch Patrick: You like psychics?
Why not to watch: It is painfully stupid.