Ten Days of Terror!: The Blood on Satan's Claw

Films: The Blood on Satan’s Claw
Format: Streaming video from Hulu + on Fire! 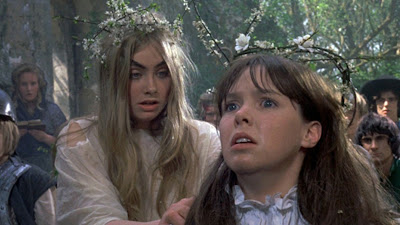 Sometimes you come across a movie and you wonder who the hell the target audience could have been. The Blood on Satan’s Claw is very much that kind of a movie. This is a horror movie, but one that is very strange in a lot of ways. There is a sort of connection to the Gothic Hammer films of a few decades before this one. It also feels connected to a film like The Witchfinder General in a lot of its themes. Allegedly, this is set in the early 19th century, but it feels as if it’s set a couple of centuries earlier than that. The best way I can put this is that it feels like a natural double-feature companion to The VVitch, a sort of earlier British cousin.

As I said, this is a story that takes place in the early years of the 19th century. We’re in rural England, when a plowman named Ralph Gower (Barry Andrews) turns up something in the field he is plowing. It appears to be humanoid but deformed. Worried about what it might portent, Ralph runs to the local judge (Patrick Wymark), but when they return, the body has disappeared.

Meanwhile, Peter Edmonton (Simon Williams), a member of the local gentry, brings his fiancée Rosalind (Tamara Ustinov) to meet his aunt (Avice Landone). The aunt does not approve of Rosalind, and, forced to give the girl accommodations for the night, sends her up to the attic. She starts screaming in the middle of the night. In the morning, she’s carted off to Bedlam, and as she is being led out, Peter notices that one of her hands appears to have transformed into a claw. Convinced that the house is filled with evil, Peter spends the night in the attic, but is attacked as well. He is convinced that he is being attacked by a clawed hand, which he attacks; and it turns out it was a hallucination, and he’s cut off his own hand.

From here, the local people, particularly the children, are going to be seduced into devil worship and evil, led by Angel Blake (Linda Hayden). We’re going to get the murder of children committed by other children, an extremely unpleasant rape and murder sequence attended by most of the local villagers, and weird patches of hair growing on people that, we learn eventually, are going to be flayed off of their bodies and used to bring their demon lord Behemoth into the real world (and just because it’s funny, the subtitles are convinced that his name is not Behemoth, but “Bear Moth”).

The highpoint of the film, at least for me, is when Ralph finds a couple of local men attempting to drown a young girl named Margaret (Michele Dotrice). Ralph saves her but finds a patch of that same hair on her. Thinking she is a victim, he arranges to have the patch removed, hoping to save her. Turns out that it was a bit of a mistake; Margaret is fully a member of the satanic cult and wants to be released so that she can return for the ritual to bring Behemoth into the real world.

The Blood on Satan’s Claw is an odd film, because for much of the running time, it seems like we don’t have a real protagonist. We just have people who are slowly being dragged into a cult and a group of people who are already there. It turns out that Ralph the plowman ends up being one of the main protagonists, and that’s not really clear until the end of the second act. Before that, this is essentially a series of escalating, disturbing events that lead us to the conclusion. The judge, who is certainly positioned as the leader of all that is right and holy on the side of justice and against the satanic worship, is more or less absent for the entire middle third of the film.

That might be the biggest issue with the film. There’s certainly a direction that it’s going to go and that we expect it to go, but it takes a strange and circuitous route getting there. That’s not always a bad thing, of course, but the film doesn’t really give us anyone to sympathize with beyond the people who turn out to be the victims of the cult.

I enjoyed this pretty well as something to watch, but I have to admit I expected it to be something considerably different. That’s especially true with the ending. We certainly get a denouement that closes off the main story, but it leaves a lot of threads dangling and untied. Realistic? Sure, but not very satisfying.

Why to watch The Blood on Satan’s Claw: It’s in the same territory as The Wicker Man, The Witchfinder General, and The VVitch.
Why not to watch: It’s unfocused until the end.