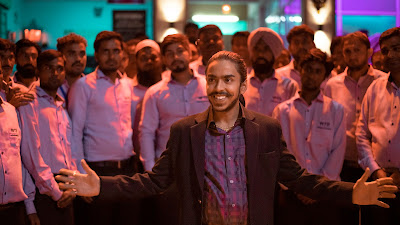 Say what you will about NetFlix, but they have started going more and more out of their way to bring in shows and movies that aren’t from a Western perspective. The White Tiger, which was ultimately nominated for Best Adapted Screenplay, is such a film. While the film is at least partially in English, this is very much a film that is thoroughly enmeshed in Indian culture. In fact, the use of language is a big part of that. The characters shift between Hindi and English naturally and constantly, and it becomes something akin to its own language, a sort of Delhi pidgin.

The White Tiger is the dark shadow of Slumdog Millionaire. Like the film that won Best Picture more than a decade ago, this one is about a young man who began in terrible poverty and ends as a success. Don’t worry—that’s not a spoiler. We start knowing that our main character is a man of means when the film begins.

Much of The White Tiger deals with the reality of life in India. What we learn is that while the caste system is dead or dying on the surface, but it’s still very much alive in many ways. For the millions not born into money and privilege, life is something akin to slavery, unable to leave a life of terrible and painful servitude. Our main character, Balram Halwai (Adarsh Gourav), likens this to a rooster coop, where the roosters sit and watch the roosters before them get killed. They know what is coming for them, but they don’t try to escape or get away. Much of this, we learn, is leverage. A servant who steals from his master will end up killed and will have their family killed as well.

Balram is a bright and curious child, attentive in school and smart. But when his father is unable to make enough to pay “The Stork” (Mahesh Manjrekar), the village landlord, Balram is forced to work in the local tea stall. In a way, Balram sees his life planned in front of him. He will live in this kind of terrified squalor, forced into a marriage by his grandmother (Kamlesh Gill) and ultimately lost and forgotten. Wanting more, he convinces his grandmother to sponsor driving lessons with the promise of sharing his eventual chauffer salary. Soon enough, Balram is hired by The Stork’s family as their second driver. His main concern is Ashok Shah (Rajkummar Rao), The Stork’s younger son and Pinky (Priyanka Chopra Jonas), Ashok’s Americanized wife.

While The Stork’s family is regularly abusive to Balram, Ashok and Pinky are not as cruel. They still very much look down on him, and a series of events cause Balram to realize that he is expected to be willing to kill himself for them while they ultimately see him as completely disposable. This comes to a head when Pinky insists on driving the car and kills a young child. The family forces Balram to take the blame for this, and while there are no real consequences from this, his treatment by the family is just as abusive as ever despite his willingness to sacrifice himself.

The title The White Tiger refers to an animal that we are told is born once in a century. Balram is told that he is such a white tiger and it is this belief in himself that causes him to live and behave the way he does. The threat of his own death and the retribution that will come against his family is what is assumed will keep him in check as it does with everyone else in the servant caste and the lower classes. But as the white tiger, Balram must decide if he has what it takes to truly become what he thinks hist destiny should be.

There’s no good reason that we shouldn’t be talking about Adarsh Gourav in the running for Best Actor with the brutal Jekyll and Hyde performance that he offers here. It was a pretty good year for performances, but not so good that room couldn’t be found for Gourav.

One of the biggest issues I have with The White Tiger is a personal one, and it’s one that a lot of people won’t share with me. I frequently find it difficult to get involved with a movie where I do not sympathize in some way with at least one of the characters. Balram is the only character we really spend enough time with and who is even remotely sympathetic at the start of the film. Everyone else around him is either pathetic, cruel, or manipulative.

Balram starts as a sympathetic character, but over the course of the film, he learns that cruelty, caring about nothing but his own life and his own attempt to rise above his caste and station is the only way to break free of that rooster coop of waiting to be killed while watching it happen to everyone else. The hell of The White Tiger is that over the course of the film we see someone slowly and irresistibly become Kaiser Soze.

It’s a hell of a movie, and it honestly deserved more than a single Oscar nomination.

Why to watch The White Tiger: A surprising rags to riches story.
Why not to watch: There comes a point when you realize Balram is hard to root for.