Ten Days of Terror!: A Nightmare on Elm Street 4: The Dream Master 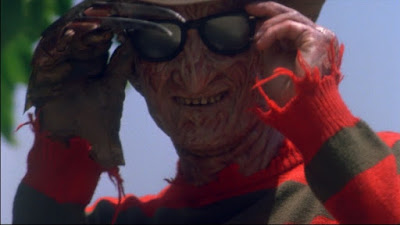 Horror sequels are something of a known quantity in a lot of respects. The rules of the horror movie universe have been set up, and the real goal from the filmmaker is to give the audience more spectacle than in the previous movie(s). Honestly, it’s one of the reasons that sequels aren’t very good as a rule. Plot and keeping with the original narrative are often jettisoned in lieu of the bread and circuses of elaborate death scenes and more brutal killings.

And this is where A Nightmare on Elm Street 4: The Dream Master comes in. This movie follows the very successful third film in the series, the one that righted the ship after the dismal first sequel. That puts some pressure on this film to measure up. The truth is that it does, at least in part. It’s not the equal of the previous film, but it doesn’t go too far off the rails. It continues the story as well as it can and tries to maintain some continuity with previous characters (despite one actor not returning for this film) and pass the torch, more or less, to a new set of actors.

We’re picking up a year after the previous film (conveniently released the previous year), with survivors Kincaid (Ken Sagoes), Joey (Rodney Eastman), and Kristen (now played by Tuesday Knight) all released from the facility and are back in high school. Kristen, despite having defeated Freddy Krueger (Robert Englund) in the previous film, is worried that he is coming back, and has a habit of pulling both Kincaid and Joey into her dreams.

And, of course, he is back. There wouldn’t be a movie if Freddy wasn’t coming back and coming for the people who survived. And, in typical horror movie sequel fashion, he’s going to start by eliminating the survivors of the last film before beginning on a new crop of victims. Those victims are Kristen’s boyfriend Rick (Andras Jones), his shy and mousy sister Alice (Lisa Wilcox), asthmatic Sheila (Toy Newkirk), and workout-obsessed Debbie (Brooke Theiss). Also in the mix is Dan (Danny Hassel), the man of Alice’s dreams. Oh, and if you’ve seen a movie like this before, you realize that “shy and mousy” as a description means that Alice is our final girl and everyone else is pretty much available for the chop.

What’s going to happen here is that we’ll get a few early deaths to eliminate the characters we know, but not before Kristen manages to somehow transfer her “ability to pull others into her dreams” power to Alice. Now, for what will feel like a constant trope of the remaining series, we temporarily have a “last Elm Street kid,” and then Kristen is killed and Freddy has a new set of victims. The rest of the movie will be Freddy picking off the new crop as they learn to fight back and try to stop him. Again, if you’re familiar with the style, you know that this means. We’ll get some inventive and creative deaths as the crew gets whittled down, but with each death, they learn. In this case, specifically, Alice starts to gain the strengths and abilities of her friends as they die off.

The Nightmare series has a lot of great moments, but one of the best is in this film. When Alice and Dan are attempting to rescue one of their friends, we get a sequence of the two of them jumping into a van and driving off. Cut to the friend. Back to Alice and Dan jumping into the van and driving off. Cut to the friend. This keeps repeating as Alice and Dan slowly realize that Kruger has them caught in a loop while he toys with their friend. It’s a great sequence because it feels very dreamlike—it’s reality and the audience assumes it’s reality until it becomes clear that it’s not. That’s very much the nature of a dream, so this is really effective.

It’s not easy to move a story like this forward but A Nightmare on Elm Street 4 does a pretty good job of it. It’s not a perfect movie by any stretch and it’s not as good as the third installment, but in its defense, none of the numbered sequels are. This is the last of the sequels that is worth watching. It’s downhill from here until Wes Craven was given the chance to end the series the way it needed to be ended with New Nightmare. My advice? Skip right to there and don’t waste your time with the two that come between.

Why to watch A Nightmare on Elm Street 4: The Dream Master: More classic Freddy Kruger.
Why not to watch: It’s a step down from the third installment and it’s straight downhill from here.