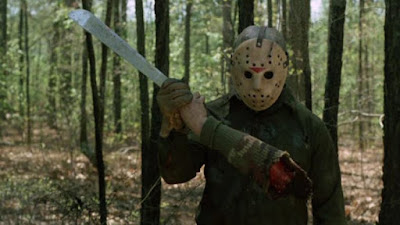 A series of films, particularly one that went on for as long as the Friday the 13th series, has ups and downs. The fifth entry in the series is one of the clear low points, existing as it does essentially out of the continuity of the rest of the series and having the larger indignity of not having Jason Voorhees as the killer. Well, things get back on track with the sixth installment, Jason Lives: Friday the 13th Part VI (sometimes reversing the order of the title elements as Friday the 13th Part VI: Jason Lives). As the title suggests, we’re going to get Jason back. Additionally, a lot of what makes Jason who he is—the un-re-killable undead murder machine with unlimited strength—is going to come from this movie.

We start with Tommy Jarvis (Thom Mathews) once again. As with the non-continuity film previously, Tommy is in his late teens. Needing closure concerning Jason, he shows up at the gravesite with his friend Allen (Ron Palillo) with the intent of opening the grave, dousing Jason’s body with gasoline, and lighting him on fire to deal with the body once and for all. Once the grave is open, Tommy is going to have a little meltdown, and he attacks the body with piece of metal fencing. And, naturally, it’s starting to storm. Tommy leaves the fence piece in Jason’s body, it gets struck by lightning, and, Frankenstein’s monster-like, Jason is reborn. He kills Allen right away, but Tommy escapes. The rest of the movie is exactly what you think it’s going to be: Jason hunts for Tommy while killing everything else that gets in his way.

From there, we’re going to get the essentially plotless series of events that we’ve come to expect from this series. From this point forward, we’re going to get introduced to a couple of characters who are then going to encounter the newly resurrected, super-strong Jason, who will dispatch them as quickly as possible, usually with a bladed implement. There are a few story elements here, though, because this entry in the series is better than most.

First, we’re going to go back to Camp Crystal Lake, which has been renamed. It’s a good connection with the first few movies in the series, and coming back to Crystal Lake does feel like a conscious choice to reconnect with the franchise history lost in the previous installment. We’ll also get a little plot surrounding Tommy. Once Jason has resurrected, Tommy attempts to enlist the local police, headed by Sheriff Mike Garris (David Kagen). He’s convinced that Tommy is disturbed, and when bodies start showing up, he becomes convinced that Tommy is actually responsible, killing people in an attempt to make them think that Jason has returned.

We’re also going to get a weird romance between Tommy and Garris’s daughter Megan (Jennifer Cooke). It’s there for no other reason than we’re going to need Megan to get Tommy out of jail and we’re going to need Tommy to have an additional reason to attempt to put Jason in his place. It’s his belief that Jason needs to be trapped in the lake, and so the third act will involve Jason killing off anyone he’s missed to this point and Tommy’s attempt to chain him and sink him into the water.

In fairness, it’s worth noting that there have been attempts to square the chronology of this film with the previous, essentially by suggesting that the ending of the previous film was a dream of Tommy’s. I’m of the opinion that it makes better sense to just have the fifth movie be more or less an aberration from the main storyline, kind of like how there are three or four different paths through the chronology of the Halloween series.

So, while Jason Lives: Friday the 13th Part VI is hardly a true cinematic achievement, it’s pretty good for what I’ve come to expect from the series. The kills are fun, Jason really becomes the unstoppable force of nature that he’s remembered as, and the kills are numerous enough and violent enough that at least a few of them are memorable. In a lot of ways, this is sort of the prototype of the series—Jason is really Jason here, and this in a lot of ways feels like the default choice for a Jason-centered film in the franchise.

The one place I will possibly step on some toes here regards the closing music. The song that plays over the start of the credits might well be the worst song in the series. Initially, I though, “This is going to be some trash band’s claim to fame, and they probably close with this in the bars they play in.” Nope. It’s Alice Cooper, and he should be ashamed of it.

Why to watch Jason Lives: Friday the 13th Part VI: It’s a return to what you expect from the series.
Why not to watch: It’s precisely the plotless murder romp you expect it to be and nothing more.