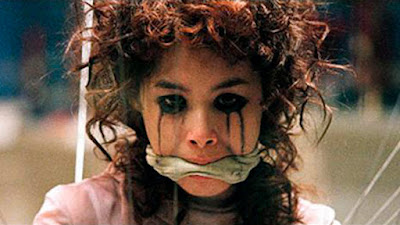 Ah, the horror anthology, my old nemesis. So often, these turn out to be disappointing because we’re just not given enough reason to care about the people involved. They can offer a good scare or two, but they don’t tend to have the emotional heft of a full-length film. Three…Extremes (or just Three Extremes if you prefer, or Sam Gang 2), as the name implies, contains three films by three different directors. As it happens, it’s also in three different languages because our three directors are from different countries.

The first film, Dumplings (which was also turned into a full-length feature), was directed by Fruit Chan; the second, Cut, was directed by Park Chan-wook; and the third, Box, by Takashi Miike. I found this very interesting—this was a sort of collaboration between a Chinese, Korean, and Japanese director. Additionally interesting is that in the West, this is considered the first of the Three Extremes movies, but is Sam Gang 2 in Asia. What the West calls Three Extremes 2 is Sam Gang in Asia, and was released two years prior to this one.

Dumplings tells the story of Mrs. Li (Miriam Yeung), a former actress, who is desperate to maintain her youth and beauty. She has lost the attention of her husband (Tony Leung Ka-fai), who evidently has a mistress. Mrs. Li learns of a woman named Mei (Bai Ling) who appears to

Finally, in Box we are introduced to Kyoko (Kyoko Hasegawa), an author who is plagued by nightmares. She has memories of her childhood as a circus performer, working with her sister Shoko (played as children respectively by Mai and Yuu Suzuki) under the tutelage of a man named Higata (Atsuro Watabe). Kyoko is convinced that Higata is favoring her sister. Desperate for his love and attention, Kyoko engineers a situation that turns very bad very quickly, and her nightmares may well be attached to this event. The fact that her publisher and Higata look very similar to each other might hold some clues.

Unlike most anthologies, Three…Extremes does not suffer from the lack of caring problem. It genuinely helps that the movie is just over two hours long and has only three stories. Instead of 10-15 minute snippets (or the 3 minute films common in something like The ABCs of Death), we get some development and storytelling, as each sequence approaches 40 minutes. In that respect, my normal issue here is alleviated.

But there is another issue here. Frankly, the three films go in reverse order of quality. Dumplings is clearly the best of the three. It’s by far the most interesting story with the most long-reaching implications. It’s also the most disturbing by far. Cut is brutal in moments (there’s a particular point that involves a blender that is quite horrifying), but it’s ultimately a bit disappointing. Box almost feels like it doesn’t belong here, and that’s really surprising coming from a director like Miike.

Typically, for an anthology film—even one that is just three stories—you want things to build. Flipping the order of these three films would improve this tremendously. Just like you want to savor the best taste of your dinner for the last bite, the last bite of Dumplings should be the end of the whole film.

Three…Extremes isn’t for everyone. For those unused to the potential for gore and upsetting ideas and imagery of the more extreme directors, this is going to be a movie that will feel like far too much. For those who regularly swim in the darker end of the horror pool, this will seem tame by many standards. In that respect, Three…Extremes has to struggle a bit to find its target audience.

Why to watch Three…Extremes: Three different visions from three different cultures.
Why not to watch: The segments go in reverse order of quality.