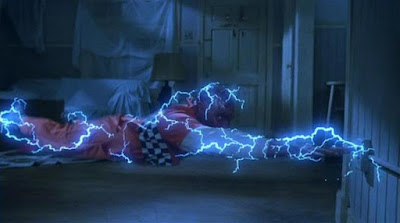 I remember a particular event from grade school. We were supposed to write a story, and I wrote something that was really derivative of a story we had read in class, like plagiarism-level derivative. I got in some trouble for it and it was over, but I remember it because it was lazy and stupid and I ended up feeling lazy and stupid. I’m reminded of this with Wes Craven’s film Shocker, since it very much feels like Craven attempting to recreate the success of the Elm Street franchise without a lot of success.

What I mean by that is our psychotic killer ends up with some science fiction-y powers that allow him to cheat death, and he uses these powers to go on indiscriminate killing sprees. There are elements of other movies tucked into Shocker. While the overall feel is very much A Nightmare on Elm Street, there’s a smattering of Child’s Play tucked in here and a substantial amount of The Hidden, one of my favorite bonkers sci-fi/horror films from the ‘80s (and I like that Richard Brooks is the connective tissue between the two films).

Shocker starts with a rampant serial killer named Horace Pinker (Mitch Pileggi) who runs a television repair business on the side of brutally murdering entire families. The police seem baffled by the crimes despite Pinker having never taken any precautions to cover his tracks or even prevent fingerprints. Anyway, local college football star Jonathan Parker (Peter Berg) has a dream of Pinker killing his adoptive family except for his police chief father. And, naturally, that’s exactly what has happened. Jonathan has a weird psychic connection to Pinker. He roughly knows his identity. And, because this is a movie, when the police move into get Pinker, he starts killing them. He also kills Jonathan’s girlfriend Alison (Camille Cooper).

Eventually, Pinker gets caught, and thus we start the second half of the film. Before his execution, Pinker makes some sort of pact with something—he’s found more or less electrocuting himself in his cell—and becomes (basically) a being of pure electricity. And this somehow allows him to take over the bodies of other people. It’s basically a combination of the spell that put a soul into Chucky in Child’s Play combined with the ability to move from body to body in The Hidden. And through all of this, Jonathan is aided and guided by the ghost of his dead girlfriend, who eventually gives him the power to…turn himself into a television signal? It doesn’t really make a lot of sense, honestly.

And that’s the biggest problem with Shocker: it doesn’t make any sense. Pinker’s powers seem to be random, sort of whatever is needed at the time. He looks like a fuzzy television signal when he moves out of people’s bodies—but also complains that he needs bodies to get into because he can’t stay like that? But in that form he can move through electrical wires? And suddenly Jonathan can do this himself?

It’s really clear to me that Shocker was intended to be the next Elm Street franchise if it had taken off. It was similar enough to the formula that it was easy to follow almost immediately and just different enough that if you squint, it doesn’t look like blatant self-plagiarism. The problem, honestly, is one of simple quality.

What I mean by this is that the Elm Street series plays by a strange logic, it is internally consistent with that logic. It sets up its own rules and then refuses to break those rules. Shocker, rather than breaking its rules (which would be the most cardinal of cardinal sins), avoids this problem by simply not setting up rules in the first place so there are none to break. But that leaves us with a very unsatisfying film, because anything can happen, and the film can claim that whatever it has don makes sense even when it feels like it’s breaking every possible rule.

Shocker sets itself up to have a sequel. There’s definitely a way to get Horace Pinker back if the movie had been even remotely successful. But it’s a movie that doesn’t really know what it wants to be, and because of that, fun while some moments are, it fails pretty miserably.

Why to watch Shocker: Great idea.
Why not to watch: There is no sense of any rules it should follow.