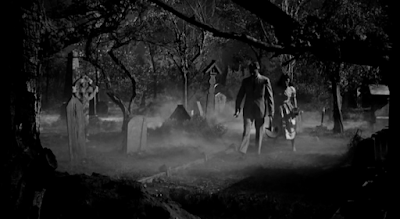 When William Castle is at the helm of a movie, you’re pretty much guaranteed to go to some strange and interesting places. You might get a special viewer to see ghosts, or the chance to have a shocker placed under your theater seat. Or, in the case of the version of 1958’s Macabre that I found, a film with an American cast that has been for some reason dubbed into Italian. I don’t know why this was in Italian. Regardless of that, though, this was actually the first of Castle’s “gimmick” films. Theater goers were given a $1000 insurance policy against “death by fright,” a policy that actually existed with Lloyd’s of London.

Like most (possibly all) of William Castle’s films, the hype is far better than the actual film that we’re presented with. The idea here is a really fun one. It’s just not nearly as scary as Castle wants us to believe, even for 1958 standards.

We’ve got a lot of backstory to deal with here, and we’ll get that backstory through a couple of flashbacks. In the past, Alice Wetherby (Dorothy Morris) has a relationship with the local cop, Jim Tyloe (Jim Backus!), but married the town doctor, Rodney Barrett (William Prince). Barrett was almost immediately unfaithful to his wife with Sylvia Stevenson (Susan Morrow). Alice has a difficult pregnancy, and when she goes into labor, he is out with his mistress and nowhere to be found. Alice dies in childbirth while giving birth to their daughter Marge.

Several years later, Alice’s sister Nancy (Christine White) returns to town. Shortly thereafter, she discovers that she is pregnant, and there are several possible fathers. Her brother-in-law refuses to give her an abortion, and soon Nancy is dead as well, possibly from a botched abortion, possibly from suicide. Regardless, Marge is now the clear heir to the fortune of Jode Wetherby (Philip Tonge), the wealthiest man in town. What this means for us is that there’s motive for his daughters to die. And suddenly, Barrett’s assistant Polly Baron (Jacqueline Scott) gets a disturbing phone call—Marge has been kidnapped, and quite possibly buried alive on this night, the night of Nancy’s funeral and interment. And this all ties in with the realization that a small child-size coffin has been stolen from the local funeral home.

Like I said above, there’s a lot of plot here, and a lot of the plot we’re given is pretty good. There’s a good amount of intrigue, and multiple people in the small town with motives to do very bad things to other people in that small town. There’s a great deal of potential here for someone with a budget and the will to write a better third act.

That’s the problem with Macabre. By the time you get to the third act and everything is revealed, it’s soon evident that the person who is actually causing all of the problems has done so in a way that leaves a huge number of bread crumbs that lead back to them. There’s a specific place that this person (and thus the plot) want to get to, evidently by any means possible, including means that so clearly and obviously incriminate the guilty person, that they’ll end up on death row by the end of the week.

That’s the biggest and most serious problem with Macabre. It’s simply not thought through. It’s as if the writers had this fantastic idea for a couple of set pieces (the discovery of the missing coffin, for instance, is pretty great), but no idea of how to get there in a clear way or what to do after them.

I often go on about the fact that some movies are simply too long for the story that they want to tell. Since we seem to be once again in a world were epic-length filmmaking is in vogue, that’s a complaint that I’ll probably continue to make for the next few years. Macabre has the opposite problem. There’s more here that could be fleshed out and more twists and turns that could be added to make the conclusion more sensible. More convolution and more complexity would make the plot at least have some semblance of being thought through, even if the Hays Code required it to fail. This movie is 71 minutes long; it needed to be 90.

I can’t speak to the non-dubbed version. I’m certain the plot is the same, so the issues will be the same. I did think it was fun to see a dubbed Jim Backus, though.

Why to watch Macabre: The story is a good one.
Why not to watch: It’s so disappointing in so many ways.