Ten Days of Terror!: The Company of Wolves

Films: The Company of Wolves
Format: Streaming video from Tubi TV on Fire! 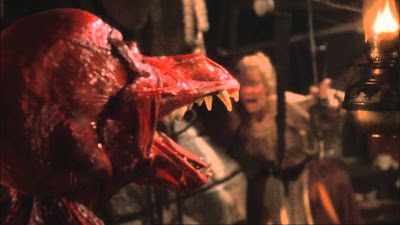 I’ve watched the bulk of the first quarter of the They Shoot Zombies list. By that I mean that I’ve seen more than 90% of the first 250 movies, and of the ones I haven’t seen a sizable portion are silent, less than 30 minutes long, or both. So, when I find one that is in that top group of films, I’m excited to see it. For the most part, I can expect that it’s going to be good. They aren’t always, and The Company of Wolves is sadly in the group that isn’t very good. I desperately wanted to like this and there’s a lot here to like. There is a serious problem with it that puts a pall over everything that it does, though. We’ll get there. It’s very depressing.

We start in the present day in the real world. A young girl named Rosaleen (Sarah Patterson) is sleeping and dreams herself into a forest straight out of Hansel and Gretel. Her parents (David Warner and Tusse Silberg) and her sister Alice (Georgia Slowe) are there as well. Soon into the dream, Alice is run down and killed by wolves. With the family in mourning, Rosaleen goes to stay with her grandmother (Angela Lansbury). Grandma was planning on knitting a red shawl for Alice but decides instead to make it for Rosaleen. As she does, she tells her granddaughter a couple of stories.

We’re going to go back and forth between stories being told in the dream to other things going in the dream—we’re either at the first level or the second dream level throughout. In the “dream” level of reality, Rosaleen learns about wolves from her grandmother and specifically learns about werewolves. She’s taught to never stray from the path in the forest, to never eat a windfall apple, and especially to never trust a man whose eyebrows meet. Rosaleen will be wooed by a local boy (Shane Johnstone) and will eventually go through the plot of Little Red Riding Hood, meeting a hunter (Micha Bergese) who will prove to be both a werewolf and Rosaleen’s actual love interest.

As for the stories, one concerns a young bride (Kathryn Pogson) who marries a werewolf (Stephen Rea) and is abandoned by him only to eventually be attacked by him years later for being unfaithful. Trigger warning on this one—when she comments that she was once married to him, her second husband (Jim Carter) slaps her. The second story is about a young man who gets a potion from the devil (Terrance Stamp) that causes him to grow hair, but he is then attacked by the plants around him. Rosaleen tells the third story—about a scorned and pregnant witch who turns her ex-lover and the guests at his wedding into werewolves—to her mother. The fourth tale is one Rosaleen tells to the werewolf about a werewolf wrongfully shot and escaping to survive.

To be fair, most of the short stories inside the framing story…or the dream framing story inside the real-world framing story…aren’t that great or interesting. They’re more like little anecdotes, and most of them are quite short. The second story is no more than five minutes long and seems to be entirely pointless (although it probably isn’t). But they are more or less morality tales told to or by Rosaleen about the loss of innocence and about her coming adulthood.

That’s the subtext of the entire film. The Company of Wolves is about the fact that Rosaleen is going to soon become a woman. The first story is about how men will change once they get married, almost becoming beasts once the woman can’t get away from them (since this all takes place before divorce would have been acceptable). The second shows the boy growing hair (going through puberty) but then being rooted in place—not a stretch to think that it’s his commitments as an adult, including relationships, that are rooting him there. The third story is about a woman getting revenge on the man who did her wrong and having power over him. Finally, we get Rosaleen more or less embracing the animal side of her nature—embracing the sex, as it were.

This is all well and good. But remember when I said there was a problem here? Here’s what it is: Sarah Patterson, who is Rosaleen and is the girl experiencing her sexual awakening over the course of this film, was 12. When we get to the end of the movie and Rosaleen is embracing her attraction to the hunter/werewolf, this means that she is essentially entering into a sexual relationship with a guy who was, at the time, about 40.

There’s no way this isn’t creepy. There are plenty of things to like about The Company of Wolves. While some of the effects are clearly mid-‘80s, there are some really cool and fun transformation sequences. There’s a cool and fun subtext going on here. But having a twelve-year-old girl as the focus of sexual attention makes it something I just can’t really watch.

Why to watch The Company of Wolves: Some very cool transformation scenes.
Why not to watch: It’s very pederasty on a very deep level.