Ten Days of Terror!: The Invitation 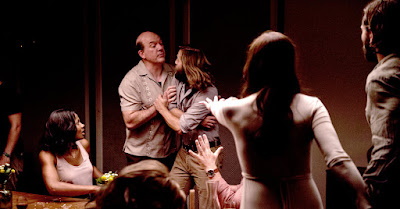 Typically, when I watch a movie that I’m going to review for this site, I write it up right afterwards or later in the day. Sometimes, I might wait 23 hours before I think my thoughts have finally congealed enough to be coherent. In the case of The Invitation, I’ve waited several days to start writing about it, and I’m still not sure I’m ready. I’ve even watched two or three movies since finishing this one and have written a full review of a film since seeing this as well. I simply haven’t really figured out the best way to approach The Invitation, because a lot of the discussion feels like it would dip into spoiler territory.

The Invitation is a slow-burn movie, one that takes until the third act to really step into high gear. For people who need their horror movies to be immediately bloody and gory, this is going to be a problem. The Invitation instead sets up a mood of things being just a little bit off. Or maybe it’s all in someone’s mind. Or is it a little of both? We don’t really know until the third act when all hell breaks loose.

We start with Will (Logan Marshall-Green) and his girlfriend Kira (Emayatzy Corinealdi) on their way to a dinner party. On the way, they hit a coyote, which Will is forced to put out of its misery with a tire iron (don’t worry—it’s not on screen). Once they arrive, we’re introduced to most of the rest of the players. Primarily, these are Eden (Tammy Blanchard) and her husband David (Michiel Huisman), whose house this event takes place at.

Over time, we learn that this is the first time all of these people have been in the same place for two years. Others in the party are Gina (Michelle Krusiec), who is waiting on her boyfriend; couple Tommy (Mike Doyle) and Miguel (Jordi Vilasuso); Ben (Jay Larson), who is there without his wife; and Claire (Marieh Delfino). We also meet Sadie (Lindsay Burdge), who is a guest of Eden and David. We also learn that Eden and Will used to be married. They split up when their son Ty was killed in an accident.

Slowly, the pieces start to come into place. Eden, desperate in her grief, ended up at a cult-like compound of a group called The Invitation, where she met David and Sadie. The rest of the group is naturally leery of what they have heard is clearly a cult group, but Eden, David, and Sadie tell them that it’s instead a way to cope with grief and loss. A new person arrives; Pruitt (John Carroll Lynch), who is another member of The Invitation group.

While everyone seems to be dealing with this revelation of a possible cult group slowly, it is Will who has the most severe reaction to what is happening. Something is off, Will is convinced, and just about everything that happens around him convinces him that things aren’t right. Eden has gotten past her grief too quickly. Gina’s boyfriend Choi (Karl Yune) left a message that says he was at the house, but no one has seen him. David seems to be constantly concerned that the doors of the house remain locked.

I don’t want to go further than this, because if you get through the slowly building tension of the first two acts, it pays off in so many ways over and over again.

Just about everything in The Invitation works. In fact, the only caveat I would offer to anyone is that people who don’t like slow build horror or thriller films are going to have trouble with the first 70-80 minutes of this. People who appreciate that kind of terror and slow realization of horror being ratcheted up a notch at a time will find this one of their new favorite films of the last decade. I want to talk a little more about what this is really about, but I’m going to do that under a spoiler tag.

The Invitation is very much a film about the nature of cults and of cult mentality. When I say this, I’m not talking about the sort of “oh it’s a cult” comment for groups like Jehovah’s Witnesses and the Mormons (although I think they qualify…but we don’t need to go there). This is more Branch Davidian/Heaven’s Gate/Jonestown cult. We’re looking at what sort of mentality would get someone to that point, where they will commit acts of atrocity and terror because they have been convinced to do so by someone else.

In this respect, The Invitation is truly terrifying. There’s nothing going on here that is supernatural or otherworldly; this is entirely believable. In fact, it’s far too real in what we see in the world today, and that makes it even more frightening.

Karyn Kusama has done some really interesting work in the past. I don’t think she’s done anything better or more potentially important than The Invitation, and I hope she continues to create films like this one.

Why to watch The Invitation: The third act is a strong cup of coffee.
Why not to watch: If you don’t like slow burns, you won’t like this.