Ten Days of Terror!: The Kiss of the Vampire

Films: The Kiss of the Vampire
Format: DVD from Nippersink District Library through interlibrary loan on basement television. 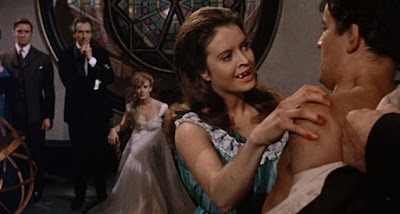 The 1960s Hammer horror movies feel like the last gasp at making the sort of old-school Gothic horror of the classic Universal films. There’s an attempt here to be scary in the way those films were. They aren’t truly scary, not truly horrific or the kind of film that induces nightmares, but they are absolutely horror movies and nothing else. There’s a sort of malevolence in many of these movies, especially the ones that deal with vampires. There’s often some sympathy for Frankenstein’s monster or werewolves, but Hammer vampires are evil. That’s clearly the case in The Kiss of the Vampire.

We open with a burial scene that ends with father of the buried girl slamming a shovel through the coffin to more or less stake her. And, since there’s blood from the coffin and a scream, it’s a good bet that she was a vampire after all. Following this opening, we’re introduced to Gerald (Edward de Souza) and Marianne Harcourt (Jennifer Daniel). They are a newlywed couple traveling in a new horseless carriage (this being roughly fin de siècle and vaguely Europe-ish). The car runs out of gas, stranding them in southern Germany.

It is here that our newlyweds encounter Ravna (Noel Willman) and his children Carl (Barry Warren) and Sabena (Jacquie Wallis). The young couple are entranced by them, so it’s not a surprise that they are excited when they are invited to a party. It is here that things turn sinister. Marianne is separated from her husband and locked away where she is soon preyed upon by Ravna. Gerald is told by everyone, including his innkeeper, that he arrived in the area alone.

This is how we are more formally introduced to Professor Zimmer (Clifford Evans), who turns out to be the despondent father from the beginning of the film. Zimmer has been chasing Ravna and his cult for some time because of the death of his daughter. He’s aware that Marianne is trapped and probably being turned into a vampire. He’s aware that Gerald is ready to jump out of his skin. But, he’s also aware of a ritual that can destroy Ravna, and that the time for the ritual is soon approaching.

The truth is that I like the idea of The Kiss of the Vampire a lot more than I actually like The Kiss of the Vampire. There’s a concerted effort here to keep the film under 90 minutes (it’s 88 minutes long), and because of that, the narrative tends to jump around a lot more than it should. A lot of scenes happen without a great deal of preamble. That’s nice from the sense of moving the plot along, but there are times when it doesn’t make a great deal of sense. This is a film where the biggest villain isn’t the vampire, but the film editing. It needs to have a few transitional scenes spliced back into it for continuity and for everything to make sense.

The idea of a vampire cult is a fun one, though. And once again, it’s the idea that is far better than the execution. Much of this stems from the fact that The Kiss of the Vampire takes a very long time to get going. So much seems to be just setting up the characters and the relationships that by the time we get to actual vampires, it feels like there’s not that much time left (because there isn’t). Once again, it’s the editing that can be faulted, although this problem is at least in part from the screenwriter. So much is setup that by the time we get to the action, the film is almost over.

So, The Kiss of the Vampire ends up being the right length for a horror movie, but far too short for the story that it wants to tell. It needs to be at least 10 minutes longer, and possibly 15 minutes longer. Either that, or the first act needs to be severely edited down to put more into the last act. So much time is spent making us care about the relationship between Gerald and Marianne that when Marianne is finally put into peril, there’s no time left to really make us that concerned for her well-being.

The best I can say for The Kiss of the Vampire is that it’s interesting. Anyone who knows anything will realize that that’s not always…or even often…a compliment.

Why to watch The Kiss of the Vampire: Hammer vampire horror!
Why not to watch: It takes forever to get anywhere, then attempts a bunch of shortcuts via editing.

Email ThisBlogThis!Share to TwitterShare to FacebookShare to Pinterest
Labels: Don Sharp, horror, The Kiss of the Vampire