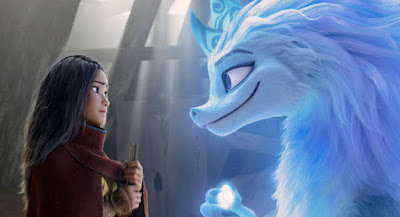 I don’t tend to predict Oscar films, although I do every now and then look to get ahead. I think a Best Animated Feature nomination for Raya and the Last Dragon is very likely, although it will also probably lose to Luca. Regardless, I’d put some good money down on this being nominated. So, when I saw it at one of the libraries I use, I figured I’d give it a watch. Sure, I could have watched this on Disney Plus, but I like to support my libraries when I can, and this helps their numbers.

I went into this completely cold, expecting that there might be a bit of a feel of How to Train Your Dragon. I did not expect that this movie wanted nothing less than to be seen as Disney’s version of Avatar: The Last Airbender (the Nick show, not the terrible, terrible movie). It seriously might as well have started by telling us that everything changed when the Fire Nation attacked.

Okay, that might be going a little too far, but it’s really not going a lot too far. We get the backstory of the kingdom in which this story will take place. Five hundred years ago, the world was peaceful and prosperous. Humans and dragons lived together in harmony along a dragon-shaped river. Then the Druun, creatures of smoke that turn both humans and dragons to stone, attacked. Eventually, a dragon named Sisu (voiced by Awkwafina eventually) created something called the dragon gem that banished the Druun. All of the petrified people came back…but the dragons didn’t.

In the years that followed, the land split into five kingdoms—Tail, Talon, Spine, Heart, and Fang—named for where they sit on the river. The five kingdoms fought for possession of the gem, and eventually it was Heart that claimed it. Now, in the present, Raya (Kelly Marie Tran) is training to learn how to protect the gem with her father (Daniel Dae Kim). He has called representatives from the other four kingdoms in the hopes of reuniting the kingdoms. But, of course, there is treachery. It comes from Namaari (voiced initially by Jona Xiao and then Gemma Chan), the daughter of the leader of Fang. In the attempt to steal the gem, it is broken in to five pieces and one is claimed by each of the kingdoms. However, it also allows the Druun to return. Since that time, Raya has attempted to track down Sisu because there is a legend that she is still around.

Of course Sisu is still around and of course Raya eventually finds her. The bulk of the film consists of Sisu and Raya collecting the different pieces of the gem (starting at Tail and working her way forward) and collecting someone from each kingdom along the way. Meanwhile, she is being pursued by Namaari who wants to stop her.

If you need the Avatar comparison made directly, Katara locates Aang, then travels across the world, picking up someone from each kingdom (Sokka, Toph, and eventually Zuko) while being pursued by various agents of the Fire Nation. If you've come this far with the metaphor and you know what happens with Zuko, how things wind up with Namaari will not be a surprise.

Raya does do some things right. I appreciate that for a story that clearly has Asian roots, virtually the entire cast is voiced by Asian actors. In fact, the one actor who isn’t is Alan Tudyk, who plays Raya’s animal companion Tuk Tuk, who is essentially a cross between a pillbug and an armadillo. As a side note, this is the second time Tudyk has played an animal sidekick with a reduplicated name since he was also Hei Hei in Moana.

It’s also interesting that in a movie that is very much fueled by women characters—Raya’s father is out of commission early on, and after that only a couple of her sidekicks are male—there is a significant effort to make these characters act in male ways. Raya and Namaari fight a lot, and the fight feels very…masculine…in how it is depicted. That’s a bit of a failing. However, what isn’t a failing is that the relationship between Raya and Namaari. It's the Disney princess lesbian romance you didn’t know you wanted. It’s not overt but watch the credits and the artwork and tell me that I’m wrong. Another plus is that there are a lot of empowered women in this world. Tail, Talon, and Fang are all run by women, and this is something that is simply true--it's not explained or explained away. It's just a reality of this world that there appears to be a great deal of equality between men and women.

Look, this is a pretty film and it does a lot right. I just wish that it hadn’t tried to squeeze three seasons of Avatar into 107 minutes.

Why to watch Raya and the Last Dragon: It’s the Disney lesbian romance you didn’t know you wanted.
Why not to watch: It really wants to be Avatar: The Last Airbender and it really isn’t.