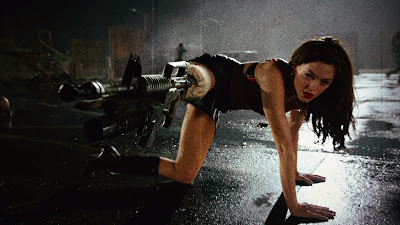 Why didn’t Grindhouse work? I mean, I would point at least in part to just how disappointing the Death Proof side of the film was, but that can’t be all of it. Grindhouse was a great idea for a movie. We got two short films that were specifically grimy and designed to look like they’d been through a ringer. They were short on plot and long on violence and ridiculousness. And they contained a collection of fake trailers that were generally very funny. Gun to head, Edgar Wright’s trailer for Don’t is probably my favorite moment in the collection. That said, Planet Terror is actually a fun stand-alone film.

Planet Terror is a zombie film in the same way that 28 Days Later is a zombie film. What this means is that there are creatures that act like zombies, but they aren’t actually reanimated dead. Our zombie agent is a gas that turns people affected by it into creatures with exploding pustules that clearly want human flesh, except when it’s plot-necessary that they don’t. And the infected are brainless flesh eaters except for those points in the film where it’s important that they have fully human intelligence. Look, no one watches Planet Terror for the plot.

Anyway, a military deal gone bad releases the gas that creates the zombie plague in the middleof Texas. At the center of this is Lieutenant Muldoon (Bruce Willis), who appears initially to be immune to the green zombie gas released by scientist and pseudo-arms dealer Abby (Naveen Andrews). Meanwhile, all hell starts to break loose in the surrounding town, and we’re going to have a number of plot threads that get tossed together all at once. Go-go dancer Cherry Darling (Rose McGowan) quits her job and discovers her ex El Wray (Freddie Rodriguez) in a barbecue joint run by J.T. (Jeff Fahey). Across town, Doc Block (Josh Brolin) and his wife Dakota (Marley Shelton) are having marital problems caused not the least by Dakota’s plans to run off with her lover Tammy (Fergie, yes that Fergie). And into the hospital where they both work, we’re going to toss in the beginnings of the zombie plague.

And really, that’s pretty much it. Planet Terror isn’t made with an actual story in mind. It’s a series of scenes that would be cool or nasty or funny to film, and the way the story and the plague work are more or less fudged around those ideas as much as might be needed. Do we need the zombies to be mindless killing machines that eat human flesh uncontrollably? Okay, we can do that. Do we instead need the zombies to be intelligent, capable of carrying on a conversation, and interested in vengeance? Okay, we can do that, too.

Honestly, the entire point of Planet Terror is Rose McGowan’s leg. See, at one point, her leg gets removed by some zombies. Now, in literally every other instance in this movie that someone has that kind of contact with zombies, they get infected. In this case, though, she manages to not get infected (perhaps she’s immune?). Anyway, El Wray gives her a peg leg at one point, which is played for comedy, but as the third act begins, he fits her leg with an assault rifle. Naturally, this is going to lead to scenes of Cherry Darling mowing down scores of zombies with her assault rifle leg…with no indication of how she is pulling the trigger.

And who cares? It’s not about that. This is not a movie about realism or verisimilitude or anything other than hot zombie carnage, body parts (Tom Savini, as a deputy, gets torn into multiple pieces at one point), and nothing else. It’s not supposed to make sense; it’s supposed to be fun to watch.

But all of that aside, Planet Terror is stupid fun and it doesn’t pretend to be anything else.

Why to watch Planet Terror: Rose McGowan has a machine gun leg.
Why not to watch: If you’re watching this for plot consistency, you’re going to be disappointed.