Ten Days of Terror!: Night of the Eagle/Burn, Witch, Burn! 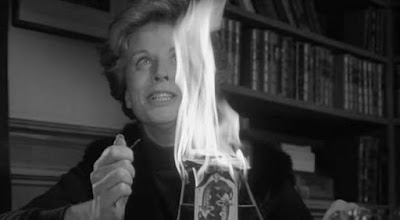 There is a particular joy in watching movies from a list sometimes. Sure, you have to dig through some garbage at times, but then you find something that makes that struggle worthwhile. Such a film is Night of the Eagle (also released under the more evocative name Burn, Witch, Burn). I honestly had no idea what to expect going into this, but this is a film that I can absolutely see going into regular rotation. It’s smart, the third act is completely unexpected, and it is 100% better than its tiny budget. How come no one has ever told me that this film existed?

Norman Taylor (Peter Wyngarde) is a psychology professor who has a particular interest in debunking the paranormal, psychics, and witchcraft. His career has seen a meteoric rise despite his relative youth, much to the apparent distress of the other people in his college department. He is extremely popular with his students and his lectures are well-attended. What he doesn’t realize is that magic is real, and that much of his success is coming from the witchcraft practices of his wife, Tansy (Janet Blair). What he also doesn’t realize is that witchcraft is how the department works; Tansy has a frantic night finding a poppet left by Flora Carr (Margaret Johnston), the jealous wife of a potential rival of Norman’s.

Norman, who is very much a rationalist, discovers that Tansy is practicing magic and he puts an immediate stop to it. In fact, he forces her to burn all of the magical items she has in the fireplace, and immediately things start to go to hell for both Norman and Tansy. Norman receives a call from an obsessed student (Judith Stott) who propositions him. The next day, her boyfriend threatens him with a gun, and someone appears to attempt to break into their house. While terrifying in the moment, Norman manages to make it through with his job still intact.

But it’s Tansy who is most affected by this. Remembering an experience when she and Norman were in Jamaica, she tries to make a pact with the forces of the supernatural to take her rather than her husband. And what we learn slowly as the film rolls is that these forces really do work and are real and are truly affecting their lives. And the best part of what you’ve got from this write-up is that it doesn’t even touch on the third act of the film where it gets truly insane, and where both of the film’s titles make sense.

What makes Night of the Eagle really work is just how slowly it builds up to the realization that maybe the magic is real. For the first two acts, we’re not sure. It could all be coincidence. We find out the truth in a big way in the final act of the film and it pays off so beautifully. Sure, it’s strange and it’s low budget, and it absolutely doesn’t matter because by the time we get there, we’ve already bought into the entire premise.

Low budget potboilers like this one don’t tend to get a great deal of acclaim, which is very much a shame, because Peter Wyngarde plays this like a poor man’s James Mason and does it perfectly. Norman is not a bad person, but he’s flawed in a lot of ways. He’s a bit too smart and a bit too sure of himself, and that’s going to get him knocked down a few pegs by the end, and he plays this beautifully as well. Matching him are both Janet Blair, who seems caught up in forces beyond her control, and Margaret Johnston, who is devilishly fun in the final act.

Night of the Eagle works because of quality acting and quality writing. The characters are smart and act in smart ways throughout, even when that turns out to have been the wrong choice. We rarely think that someone is doing something for the wrong reason or because the plot necessitates it. Instead, the events of the film flow naturally out of the desires and behaviors of the characters we are given. We end up buying into the premise because the characters do, and because they managed to make it compelling.

This movie is dark and a little twisted, and a lot of fun. I went into this not really expecting much of anything but checking off a box, and I walk out the other side 90 minutes later a true believer that this underknown little gem is one of the best of its genre in its decade. Hunt this one down; you won’t be disappointed.

Why to watch Night of the Eagle: It's far better than you expect.
Why not to watch: No good reason. You should track this down.