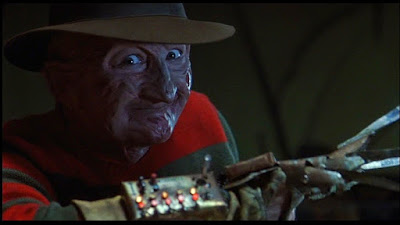 You’ve gotta start somewhere. For director Rachel Talalay, who has been a part of a bunch of really successful television shows, that start in the director’s chair was for Freddy’s Dead: The Final Nightmare (Also known as A Nightmare on Elm Street 6). It is a very inauspicious beginning, but, as I said, you have to start somewhere. The idea here was to wrap up the Nightmare franchise in a way that wouldn’t require a sequel. The series was petering out and it needed to end. Interesting that this actually made more money than the previous film. But, in truth, this was bad enough that no one wanted to make another one.

I’m not going to hold back on that, and I’m not really going to blame Talalay that much for the problems. She didn’t have much of a script to work with going in. This is a case of pretty much everyone being completely out of ideas and needing to create a movie anyway. Most of this only barely makes sense and there’s almost no connective tissue to the previous films. The buy-in here from the audience is so substantial that it beggars the imagination.

In fact, this movie is almost entirely nonsensical. We start in a dream that is very clearly a dream—if you don’t figure out that we’re in a dream world before the woman next to our main character, John (Shon Greenblatt), get shot out of an airplane, that’s on you. Eventually, we discover John (named that because he’s a John Doe) outside Springwood, OH. He’s soon taken to a youth shelter since the cops don’t want to deal with him.

John Doe has some Springwood-related materials in his pocket, and Dr. Maggie Burroughs (Lisa Zane) wants to take him to Springwood to see what might trigger his memory. Unbeknownst to them, three other occupants of the shelter—Spencer (Breckin Meyer), Carlos (Ricky Dean Logan) and Tracy (Lezlie Deane) have stowed away inside the van in an attempt to run away. And here’s where things really start to not make sense to me—it goes from “we’re in a dream state” to “are we just constantly in a dream state?”

See, Springwood is now populated by people who are all completely insane because Freddy Krueger has killed literally all of the children. There’s supposed to be a carnival happening, and it looks like what someone who had absolutely no creativity would create for a carnival in terrible little town in a really badly-written comedy (so perhaps Talalay deserves some of the blame for this). And when our three stowaways are discovered, they are told to take the van back to the shelter (Dr. Burroughs trusts them with the van despite their attempt to run away), but they can’t leave the town, because we’re evidently still in a dream state. Or something?

We’re going to get some deaths because this movie is badly enough written that our three stowaways decide it’s a good idea to walk into an abandoned house (and yes, of course it’s “the” house) and go to sleep on the mattresses that are in an abandoned house. Meanwhile, John and Dr. Burroughs discover that there is a Krueger child. John is convinced it’s him.

Look, this movie is dreadful. I’m going to spoil it, so if you really don’t want this movie spoiled, now is the time to walk away.

Carlos and Spencer both get whacked by Freddy. Spencer’s death, which involves him being stuck in a video game, but evidently acting like he’s in the video game in the real world, is particularly embarrassing. Anyway, the three survivors make a getaway, but it’s John who gets captured by Freddy and killed because Freddy lets slip that his child is actually his daughter. And when Dr. Burroughs and Tracy get back to the shelter, no one remembers John, Spencer, or Carlos.

Are we still in a dream? Are we out of it now? Were Carlos and Spencer and John all part of another dream that was partly in the real world. Does Freddy taking their lives and souls mean that suddenly no one remembers their existence, something that is completely non-canonical from the previous five movies? None of this is explained. None of this is even attempted to be explained.

There’s some attempted backstory for Freddy that really isn’t that good. There’s also some really bad attempted 3D effects with poorly-animated dream demons that evidently give Freddy eternal life and keep bringing him back. And, inexplicably, Yaphet Kotto is in this as another doctor who attempts to help get rid of Freddy. He’s better than this movie. Honestly, most people are better than this movie.

Why to watch Freddy’s Dead: The Final Nightmare: At least it doesn’t get worse.
Why not to watch: It’s arguably the worst movie featuring Freddy Krueger.