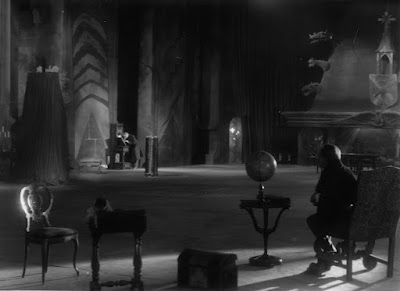 I can find getting into silent movies difficult sometimes. I stand by the opinion that most silent dramas haven’t really translated to the modern day very well. It’s hard to take them too seriously, and even the truly great ones come across as strained and melodramatic. Comedy still works; a man falling on his ass is funny whether you can hear it or not, and a lot of that stunt work really holds up. Horror movies are a mixed bag. It really depends on what the film is going for. In the case of the 1928 French version of The Fall of the House of Usher (or, more properly, La Chute de la Maison Usher), the goal is purely atmosphere, and so it generally works.

If you don’t know the story, I’ll give you a quick run-through. An unnamed narrator (played in the film by Charles Lamy) is asked to visit his friend Roderick Usher (Jean Debucourt) in the crumbling Usher family mansion. The narrator discovers that Roderick is very much physically decrepit and is obsessed with the failing health of his sister Madeline (Marguerite Gance, who in this version of the story is Roderick’s wife rather than his sister). As they represent the end of the Usher line and there will be no heirs to whatever is left of the family and since the literal house is literally falling apart, by the time the story ends we’re going to experience both the literal and figurative fall of the literal and figurative House of Usher.

There are some changes from the story to the movie. The biggest one is the shift of Madeline from sister to wife. In this filmed version, Roderick is obsessed with painting Madeline, who seems to fade physically the more the portrait of her comes close to being complete. A lot of the story consists of our narrator reading another story to Roderick, so we’ll thankfully dispense with that in the filmed version.

What La Chute de la Maison Usher isn’t is subtle. There’s a lot of telegraphing going on here, which is pretty typical for something made in the silent era. We learn, for instance, that Madeline has a habit of falling into cataleptic trances that mimic death. Do you think this means that she’s going to fall into one of these trances and be taken for dead and, in one of Poe’s favorite plot twists, entombed alive? Of course she is. In fact, this event is what’s going to trigger the actual and metaphorical fall of the house. Everyone save the narrator is going to go insane and die and he’s going to just barely make it out alive. You’re right—that’s a spoiler. The short story has been around since 1839 and this film since 1928. You have only yourself to blame.

Like many a silent film, La Chute de la Maison Usher isn’t really about the plot, but is much more about the atmosphere. We’re supposed to be disturbed by what is going on around us in the sense that we can’t quite see everything. In has some rough similarity in this sense to most silent horror films. The style is designed to put us in a mental and emotional headspace. In that sense, the movie is pretty effective. There are hints of the sort of otherworldliness of Das Cabinet des Dr. Caligari here without the extreme angles or the complete commitment to expressionism. It’s more about things being visible at the margins, or through mists rather than being overt for the audience.

Truth be told, La Chute de la Maison Usher makes a lot more out of this story than there should be available in the text. The 1960 version of this story from Roger Corman pulled this story out to feature length by naming the narrator and creating a love story between him and Madeline. Corman also had the benefit of being able to put Vincent Price in the tortured role of Roderick Usher, which gives us a lot of scenery chewing. We get neither of this things in this silent version, and instead, the film is pulled out to something like feature length by giving us a lot of dealing with Madeline’s trances and a lot of emoting.

It’s a cop out to say that if you like silent movies, you’ll likely enjoy this one, especially if you like silent horror movies. If you’re attuned to the style, though, you’ll find a lot to like here, even if this is padded out to extraordinary lengths without much additional plot. There’s a reason that the American filmed version of this story from the same year runs a scant 13 minutes; there’s really only about 13 minutes of story to tell.

Why to watch La Chute de la Maison Usher: Like many a silent horror film, it’s an intense fever dream.
Why not to watch: Silents are hard to watch if you aren’t attuned to them.