Married to the Land

Film: The River
Format: DVD from NetFlix on laptop. 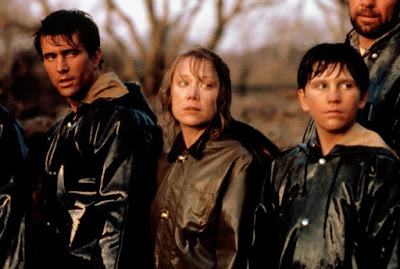 There is a mystique about the American family farm that for whatever reason has long been a staple of a certain brand of American story. It’s only natural that film producers would jump on this particular bandwagon from time to time. The mid-‘80s was definitely that time. The River came out in 1984, a year before John Mellencamp released Scarecrow about the plight of the small farmer and the year before FarmAid, the benefit concert to benefit the same. It’s not much of a shock that The River would highlight the same basic plight.

Just so you know what we’re getting into here, The River is going to be two hours of misery even if we wind up with an uplift in the last couple of minutes. We’ll have good guys who we root for and who get constantly kicked and a bad guy who we’ll root against. And for two hours we’ll watch the good guys get screwed by the bad guys and we’ll feel bad for them. I wasn’t 10 minutes into the movie when I figured out that this was going to be one of those misery parfait movies of bad things piled on top of people who struggle mightily under the weight of the rich guys who want to run them off their land.

Our good guys in this case are the Garveys, Tom (Mel Gibson), Mae (an Oscar-nominated Sissy Spacek), and their kids Lewis (Shane Baily) and Beth (Becky Jo Lynch, who seems tailor-made for the part of farm waif with one front tooth not fully grown in). The Garveys live in eastern Tennessee on a plot of land owned by his family for generations. As the name of the film might suggest, the land borders on a river, and when the film opens up, that river is overflowing its banks right onto the Garvey farm. During the flood, the bulldozer tips over and pins Tom underneath it, and he gets free moments before drowning.

Our bad guy is Joe Wade (Scott Glenn) who more or less runs the county and used to date Mae. Joe has plans to build a hydroelectric dam that will do a couple of things. First, it will provide power for the entire county. Second, it will provide water to the farms that are not as close to the river, which includes all of Joe Wade’s land. Third, and importantly for the story here, it will completely flood the Garvey farm and the farms of another dozen or so families.

With this as the set up, it should be no shock that the Garveys are deeply in debt, the farm needs repairs, and the banker (James Tolkan) is in collusion with Joe Wade. After all, the Garveys are in deep to the bank and Wade wants the land.

The River is the sort of movie that works on my nerves when I watch it. At virtually every moment, I’m waiting for a shoe to drop and for something terrible to happen to someone in the family. When we’re 40 minutes in and Lewis is learning how to weld by helping his father fix the family tractor, I’m expecting him to burn his hand off or blind himself. Every time Tom gets in the truck and drives somewhere, I’m expecting an accident. When Mae crawls under a piece of farm equipment, I’m expecting something terrible to happen to her (and it kind of does). I try not to break out the potty mouth too much on this blog, but I hate shit like this. I hate watching something and just waiting for another shoe to drop.

It’s hard not to say that The River is well acted or well made, but I frankly hate this plot about as much as I possibly can. No one likes to see the little guy get his ass handed to him over and over, and that’s really all this movie is for the bulk of two hours. There’s no pleasure in this. There’s no joy our anything other than frustration. The River is two hours of watching other people’s problems played out in a constant stream of things getting worse and worse.

I get the point. This is supposed to outrage us. We’re supposed to look at the plight of the farmers and the greed of the bankers and the financiers and be angered by what is happening. Fine. I’m angered by it. Joe Wade taking every opportunity to fuck the little guy over is an ugly thing to see, and when he uses a personal tragedy to try to muscle in on Tom and Mae’s marriage, it happens specifically to piss us off.

It’s manipulative and I don’t have a lot of sympathy for that. This is just The Grapes of Wrath moved to Tennessee and the 1980s.

Why to watch The River: A classic American story.
Why not to watch: Aside from the specifics, this is just another story of the little guy getting screwed by the big one.