Ten Days of Terror!: Under the Skin

Film: Under the Skin
Format: DVD from DeKalb Public Library on laptop. 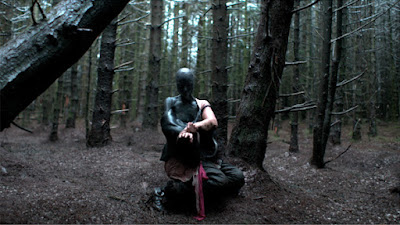 When the new 1001 Movies book came out and I saw that I had just four movies to watch to finish for the year, I planned to end with Under the Skin. This is, after all, a science fiction movie with horror elements, two genres that tend to be overlooked on the 1001 Movies list in general. It’s a movie I’d heard a lot good about, it having received a great deal of universal acclaim. I like to end October with a bunch of horror movies anyway, so it seemed like a natural fit. What could go wrong, right?

What could go wrong is that the emperor could have no clothes. I’m certain that our filmmaker here has some deep meaning attached to this film, but I’ll be damned if I know what the hell it is. Under the Skin is almost certainly an allegory of some sort, but an allegory only works if your audience can actually figure out what the meaning is. Sadly, Under the Skin is almost completely opaque in that respect. This is not a film that offers much to the viewer in terms of help. It also doesn’t offer much in terms of entertainment.

Under the Skin isn’t a film that summarizes well, but I’ll do my best here. A woman who is evidently also an alien (Scarlett Johansson) arrives on Earth and hangs around Scotland picking up guys by implying sex. However, once she gets these guys back to where she lives—evidently a vast, limitless room filled with black mirrors and lit by an unknown source, the men sink into the floor and into some amorphous liquid. Then the woman gets dressed again and goes out looking for more guys. She is evidently assisted in this by a dude who drives around on a motorcycle (Jeremy McWilliams).

Evidently, the best way to pick up guys in Scotland is to ask them for directions. The one thing I’ll suggest that the film gets right is the number of times the woman is unsuccessful in her hunting. That doesn’t make for exciting movie viewing, but from what I know about the success rates of a typical predator, it’s at least accurate.

I’m going to make a distinction here that will seem like I’m splitting hairs, but I think the distinction is important. There are movies that I watch and don’t understand, and I think those movies fall into two categories. One category are films that I can see glimmers of something where I feel like I might actually get to the heart of something with another watch or with some conversation. These movies tend to make me feel stupid, but I can at least respect the attempt. There are other movies that put up a façade of having something to say but are really just navel gazing and faux philosophical noodling that nonetheless offer an impression of great depth and hidden meaning. Under the Skin is this second sort.

There may actually be some meaning here. I might be willing to be convinced that Under the Skin is a sort of cinematic Rorschach test that allows a viewer to impart a meaning onto the film, and that a variety of readings can be mapped onto what is there. I just don’t think it’s the case. More to the point, I think this is a film that started with the idea of making something spooky and with a particular look, creating an upsetting and spectral soundtrack, and didn’t really get any further.

Am I willing to take this to its full conclusion? I’ll go close to it. I don’t think there’s any meaning here, or at least there isn’t any meaning for me. I suspect that at least some of those who call this a triumph and one of the best films of 2013 are bluffing because they’re afraid of saying that they don’t get an incomprehensible film. Well, I’m not afraid of looking stupid or like a Philistine. I don’t think there’s any “there” there. This is a stylish nothing, a series of opaque events that claim to tell a story. This is a naked emperor parading the cinematic streets with the added negative that one of the film’s crasser selling points (Scarlett Johansson does nude!) has that naked emperor poorly lit in displaying that very nakedness.

I will take this to one conclusion that I have hit on in the past. Under the Skin is the sort of film that gives film critics a bad name. Critics, unable to say “I don’t get it,” almost universally tout this film as being a mesmerizing and singular vision. The public goes into this thinking they’ll see something unique and instead get stylized nothing, and the entire idea of film criticism takes a step backwards.

Under the Skin isn’t scary, funny, surprising, haunting, or anything else. It’s a series of long, slow shots during which nothing happens, slow pans where even less happens, and unintelligible events that add up to a cipher. What it is instead is dull, pointless, and irritating. Shame on the listmakers for including this over dozens of other films that would have been better placed here that didn’t spend 108 minutes of my time sniffing its own artistic exhaust. Let the clove cigarette and beret crowd discuss the deep meaning of this over espresso. I frankly have better things to do.

Why to watch Under the Skin: Everybody says you should.
Why not to watch: This emperor has no clothes.