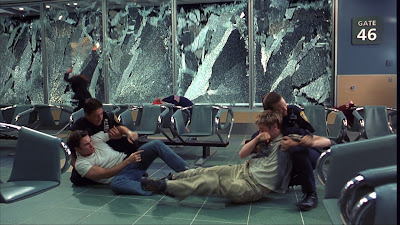 I checked Final Destination out of the library multiple times before I pulled the trigger on watching it. I’m not sure what it was the kept me from wanting to watch it, but multiple times, it sat on my desk for a week before I took it back unviewed. This time it was only slightly different—I had it until it was due and finally watched it. As someone who watches horror films, there’s something incomplete in me at having not seen a film that produced four sequels. So, finally, I guess I just decided I was tired of bringing it home and doing nothing with it.

Chances are that you know the basic story behind the film. If you don’t it’s one of those movies that can be described in an elevator speech. As a group of high school students prepare for a field trip to Paris, one of them, Alex Browning (Devon Sawa) has a bizarre nightmare of the few minutes leading up to the take-off, a nightmare that ends with the plane exploding. When Alex wakes up, the events of his dream play out exactly. He panics and is dragged off the plane along with a few others. The plane takes off and explodes, which puts Alex in the position of being grilled by FBI agents Weine (Daniel Roebuck) and Schreck (Roger Guenveur Smith). The other survivors—students Tod Waggner (Chad Donella), Clear Rivers (Ali Larter), Carter Horton (Kerr Smith), Billy Hitchcock (Seann William Scott), and Terry Chaney (Amanda Detmer) as well as teacher Valerie Lewton (Kristen Cloke) are now dealing with survivor guilt…and a lot more.

That more is that a little more than a month after the explosion, the survivors seem to be the victims of bizarre accidents that lead to their deaths. Tod, who ends up strangled in the clothesline of his bathroom thanks to a series of accidents. His death is ruled a suicide, but Alex and Clear go to investigate at the morgue, where they encounter Bludworth (Tony Todd), who tells them that Tod’s death was clearly not a suicide, but possibly not an accident, either. It is his opinion that their escape from the downed flight has created an imbalance that can only be corrected by capital-D Death itself coming for them.

And so, like any good horror movie, we have our collection of victims who will start being picked off one by one. Alex seems to have some sort of preternatural sense of what is about to happen, and soon figures out that they are dying in the order that they would have been killed had they remained on the plane. Terry is splattered by a bus and Valerie is killed through a Rube Goldberg-style series of accidents that results in her stabbed several times and ultimately exploded in her home. The FBI becomes more and more convinced that Alex is somehow behind everything and the remaining survivors become more and more convinced that he somehow understands what is really happening.

So that’s the story of Final Destination--there’s no masked killer, no monstrous evil that needs to be confronted and defeated. It’s Death itself coming for our survivors, who have no clear way to avoid being killed, since the agency that is stalking them is literally implacable mortality. As a concept, I love it.

And that, ultimately, is the issue with Final Destination. As a concept, it’s fantastic, and there are so many different ways that this story could be taken and could be made fascinating. Instead, what we get is a lot of whining teenagers who are far too cool for school trying to act tough in the face of their demise. Of all of them, only Ali Larter comes across as being natural enough to be interesting. Devon Sawa might have some talent, but that’s not evident from this film. He comes across as a bit washed out and pasty and, frankly, pretty uninteresting.

In fact, aside from the premise of having Death as the big evil, I only really like a couple of minor aspects of the film. I love the fact that there’s a character named Val Lewton, for instance. I love that the FBI agents names translated from German mean “cry” (weine) and “fear” (schreck). I actually like a couple of the inventive deaths. Val’s death perhaps goes on too long, but it’s fun getting there.

I suppose ultimately I don’t dislike the film, but I can’t think of a reason to watch it a second time. It is what it is, and I guess I’m happy to have finally gotten this off my radar.

Why to watch Final Destination: What a great idea for a horror movie!
Why not to watch: Really disappointing in where it goes.