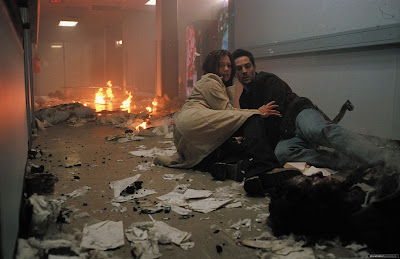 Credit where credit is due, the Final Destination movies did something different in the genre. In a genre as overloaded as horror really is, finding something that actually different in a significant way instead of just on the surface is actually noteworthy. The innovation, of course, is that there’s no bad guy. The thing that exists to kill off our series of (generally) young protagonists is, more or less, Death itself. The formula is that our characters are saved from a horrible accident by someone having a premonition. Since they were saved unnaturally, Death acts to right the score, killing them all in horrible ways that involve freak accidents. Final Destination laid down this particular set of workings, and Final Destination 2 picked up that torch and ran it a little further.

Our inciting incident in this case is a car accident. It’s one of the more famous scenes from any movie in the Final Destination franchise. A group of students are on their way to Spring Break somewhere, get onto the highway, and all hell breaks loose when a logging truck loses its load, sowing chaos and destruction everywhere. It’s actually pretty staggering—logs smashing through windshields pulping the drivers, people getting slammed into other vehicles, cars rolling and flipping, and more. Driver of the vehicle Kimberly Corman (A.J. Cook) has a premonition of what is about to happen and, rather than drive onto the highway, turns her vehicle on the onramp so that no one can get onto the road. When a cop named Burke (Michael Landes) steps up to get her to move, the truck that causes the chaos drives by, and soon thereafter a huge accident happens. So, same basic set up—our protagonists are the people who should have died in the accident and didn’t thanks to Kimberly’s actions. Oh, and we’re also told this is the one-year anniversary of the airplane crash from the original film.

True to form from the first movie, there’s not so much a plot following this as there is a series of events. The entire point of Final Destination 2 is to get us down to a final person or two with a series of inventive kills. None of the characters are going to have much in the way of personalities. Instead, they have personality traits. We have a stoner, a wannabee high-powered executive, a guy who won a bunch of money in the lottery, an angry teacher, a mother and son, and a pregnant woman. What’s then going to happen is we’re going to see most of the cast eliminated by freak accidents, some of which are elaborate and some of which are sudden and surprising.

What’s going to follow here is a minor spoiler—nothing that goes past the first 20 minutes or so of the movie. Final Destination 2 does two things really well aside from creating some very elaborate death sequences. First, and impressively, it gives us an immediate juke with the traffic accident. Burke is trying to convince Kimberly to move her vehicle while the two are standing outside of her car when the accident happens. While he is talking to her, a car carrier slams into her vehicle, killing her three friends. It’s an immediately realization that we’re not going to be watching a group of friends get killed off, but a group of strangers, because her friend group is immediately wiped out. It’s a great moment when it happens.

The second thing Final Destination 2 does really well is create some other head fakes. There are several times through the running time where it looks like a particular death is about to be set up—something is in motion and we can see a series of things about to happen that will end up with someone dying horribly. And then it doesn’t pay off. It’s the one thing this movie can do that actually works to ratchet up the tension, and it does this pretty well.

Otherwise, Final Destination 2 is literally nothing more than a series of grisly killings that happen in sequence. And some of these are really, really nasty. After the initial carnage, we’re going to be treated to a couple of impalements, a dismemberment, a crushing, a decapitation, and a few explosions. For added fun, we’re going to get the return of Clear Rivers (Ali Larter), the only survivor from the first film as well as a cameo from fan favorite character William Bludworth (Tony Todd), the mortician who seems to have a great deal of knowledge about Death.

There is a real issue with this film, though. We discover at one point that all the survivors of the initial accident had already been saved a year previously by incidents connected to the flight in the first movie. So, in a sense, Final Destination 2 is Death tying up loose ends left untied from Flight 180. As we’re going to learn in the closing moments of the film, this has serious implications in terms of whether or not we should even try to save someone’s life. In that respect, Final Destination 2 is more nihilistic than I would like.

Is it good? Not really. Is it fun? At times. It’s certainly not worth a second viewing.

Why to watch Final Destination 2: Rube Goldberg would be proud.
Why not to watch: The characters are cardboard.