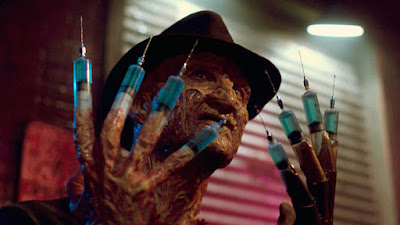 Sometimes, a basic idea is good enough to survive a serious setback. That’s very much the case with the A Nightmare on Elm Street series, which went in a very bad direction with the second film. The third movie, A Nightmare on Elm Street: Dream Warriors, is very much a return to the basic idea of a psychotic killer who attacks people in their dreams. Oh, there’s a hiccup or two here, but it does feel like a return to form for the franchise. A big part of that is the return of Heather Langenkamp as Nancy, which is an important re-connection to the original film.

We’re first introduced to Kristen (Patricia Arquette), who is plagued by dreams of our old friend Freddy Krueger (Robert Englund). In one dream, he attacks her, but in the real world makes it look like she has attempted suicide. This gets Kristen sent to an psychiatric ward where she is placed under the care of Dr. Neil Gordon (Craig Wasson). We meet a few other kids here—Phillip (Bradley Gregg), Taryn (Jennifer Rubin), Joey (Rodney Eastman), Jennifer (Penelope Sudrow), Kincaid (Ken Sagoes), and Will (Ira Heiden). All of them are plagued by nightmares, all of which seem to incorporate Freddy. We’re also introduced to their new therapist—Nancy Thompson (Langenkamp).

The common thread is that these kids are considered the last of the “Elm Street” kids, the children of the parents who killed Freddy Krueger. Nancy, of course, has some experience dealing with Freddy, and hopes to help them. She also discovers that Kristen can pull people into her dreams, which she does with Nancy one night when Kristen is attacked. We’re also going to get a couple of deaths to get things going—two of the Elm Street kids will die by Freddy’s hand to make sure that we as the audience are aware of the danger (as if we didn’t already know). These are two of the more famous Freddy kills—Phillip being puppeted by Freddy using the veins in his arms and legs, and Jennifer being rammed face-first into a television (“Welcome to prime time, bitch!”). From here, the kids need to learn to fight back as best they can under Nancy’s tutelage and with Kristen’s ability to share her dreams. And, of course, they must convince Dr. Gordon that this is all real.

We’re going to naturally have a few more deaths on the way to the conclusion. Sadly, at least as far as I am concerned, the film kills off a couple of the better characters (I won’t reveal who) in an effort to move the story forward and essentially pass the torch. I realize that a horror movie needs to have a body count, but it does often seem like the better characters are the ones killed off, and the characters that are far less interesting get carried over to the next iteration.

The real goal of A Nightmare on Elm Street 3: Dream Warriors is to make sure that there is the ability to have a fourth film. That’s essentially the point of every open-ended franchise sequel, at least within bounds of reason. The secondary goal, arguably just as important as the first one, is to provide the audience with what I used to call (and still do at times) quality kills. We want a couple of good one-liners from Freddy and some inventive kills before Freddy is temporarily defeated but given a path back to the cinematic world for the next movie. Dream Warriors does that admirably. The kills are interesting, Robert Englund is maliciously entertaining as always, and it really does feel like this is a serious attempt to right the ship after the previous misstep.

The biggest success of Dream Warriors is that it’s the best version of Freddy Krueger after the original film. In this film he is still brutal and horrific, but it’s the first film that starts to give him the snarky, sardonic personality that he became forever associated with and that made him forever a fan favorite as a slasher monster. This is the first of Freddy as violent stand-up comedian rather than just Freddy as boogeyman. This ultimately went too damn far, but here, this is tuned just about perfectly. This, more than probably anything, is responsible for the rest of the franchise, for good or ill.

Why to watch A Nightmare on Elm Street 3: Dream Warriors: The Elm Street franchise gets back on track.
Why not to watch: As usual, the horror movie kills off the best characters.