The Milk of Human Kindness 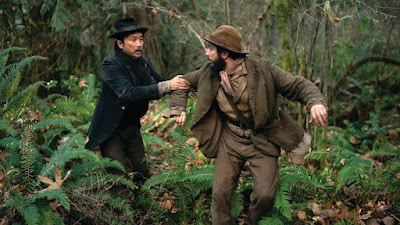 Let’s talk for a second about one of the serious problems that Oscar has. Since this blog is still at least tangentially attached to Oscar films, I feel as if it’s in my wheelhouse. We’re going to take as our text the film First Cow, which managed to be completely ignored in 2019 despite having a lot of what Oscar appears to look for. Was it the woman director crafting a film with essentially no women characters (Alia Shawkat in the beginning notwithstanding)? Was it the fact that much of the cast is lesser known? That the plot of the movie isn’t controversial? A combination of these things? Something else?

First Cow really is a very simple movie. It’s also one of those rare movies that gives us a sense of the way things are going to end and then the rest of the movie is going to get there. That beginning is an unknown woman (Shawkat) discovering two human skeletons laying side-by-side in the present day. From here, we jump back in time to 1820 and meet Otis “Cookie” Figowitz (John Magaro), who is travelling through Oregon Country as the cook for a group of trappers. One evening, he encounters King-Lu (Orion Lee) who is on the run for killing a Russian man. Otis lets King sleep in his tent for the night and then sees him off in the morning.

A few days later, the pair meets up again and spend some time in King-Lu’s shack. They talk about what their plans are and about news they have heard. Of the most importance is the news that the local rich man, Chief Factor (Toby Jones), has imported a dairy cow. He attempted to bring in a bull and the cow’s calf as well, but both died. The cow is the first milk cow in the area. Otis would love to have some of the milk so that he could bake with it. King-Lu, who has big plans for himself, things they should milk the cow, and that’s what they do. Otis isn’t too pleased with the biscuits he makes, but King-Lu is convinced that they will be a huge seller at the nearby fort.

And he’s right. The “oily cakes” made by the duo soon become a hugely popular item at the area and eventually come to the attention of Chief Factor. Chief Factor is impressed and asks Otis if he can make a clafoutis (which is a sort of fruit-filled flan pancake) because he wants to shame a guest who is convinced that the people on the frontier live like savages. Otis agrees, but is concerned that Factor will figure out that he and King-Lu are sneaking in at night and milking the cow, especially since Factor is complaining that his cow is not producing a great deal of milk.

And that’s it. Rather than dive into frontier politics, the potential for racism against the Asian King-Lu, or anything else that would normally get Oscar voters excited about a movie being “important,” we instead have this story of an unlikely friendship, of two men with both grand and simple dreams and trying to survive as best they can. That’s it, and that might be what kept First Cow out of the running for award season and out of the path of a lot of viewers.

It is slow, and there’s no getting around that. We don’t really have a great deal of plot for the first thirty minutes or so. But it’s not boring. Instead, it’s rather peaceful. Even the very simple crime the two men are committing is peaceful and slow. Otis talks to the cow while he milks it, telling it what he’s doing with its milk. It’s very sweet.

I like this, oddly, because it doesn’t have much of a plot. Many times, this doesn’t work and I end up wondering why I watched it. First Cow spends a great deal of time focused on Otis and King-Lu and their relationship. We learn about all of the places King-Lu has been and what he things of the world. We see the world through the eyes of these two men, both the squalor they live in and the dreams they have.

A great deal of First Cow is about what isn’t said and what isn’t revealed. We as the audience need to do a little work to complete the story ourselves, and I appreciate that as well.

There are a lot of people who won’t like First Cow, because it is too slow and not a great deal happens in it. It’s a small movie in the sense that the people themselves are small and ordinary and have small and ordinary lives and dreams. But this is exactly what makes them interesting and worth seeing.

Why to watch First Cow: It’s pure storytelling.
Why not to watch: It’s very slow.