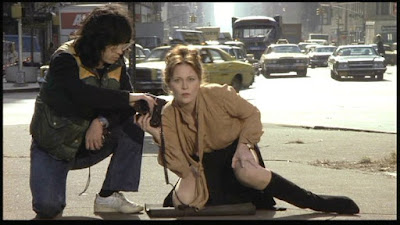 Sometimes when it comes to talking about a movie, you just don’t know where to start. Eyes of Laura Mars is a movie like that. I’d love to talk about the pedigree of this odd little film. We’ve got Faye Dunaway, Tommy Lee Jones, Brad Dourif, Raul Julia, and Rene Auberjonois acting in a screenplay written by John Carpenter. That’s remarkable. I’d also love to talk about what makes a horror movie a horror movie. Eyes of Laura Mars has some horror elements, but they’re tangential to the plot. Is this a horror movie or is it just a thriller with some psychic or paranormal elements?

Laura Mars (Faye Dunaway) is a fashion photographer who, in the world of the film, is more or less the famous fashion photographer on the planet. Lately, she’s been making her mark with photography that is clearly inspired by scenes of violence. At a massive gallery opening—one that is essentially a media event (and this, honestly, might be a bigger stretch on reality than the psychic powers), Laura has a vision. Essentially, she sees in real-time as it is happening, the murder of a colleague through the eyes of the killer.

You can see how this is going to go, right? Laura has these visions at various times and sees the people who are close to her killed off. Everyone is in danger (of course) and everyone is a suspect (also of course). These include her manager Donald (Rene Auberjonois), her ex-criminal driver Tommy (Brad Dourif), and her ex-husband Michael (Raul Julia). Investigating the crimes surrounding her is Lieutenant John Neville (Tommy Lee Jones), who has a full head of shoulder-length hair. It’s a bit disconcerting at first.

What you might not see coming but should is that we’re going to get a romance between Laura Mars and Lieutenant Neville. The two fall for each other very quickly, and it’s going to add a layer of desperation and motivation for Neville to keep her safe, since it’s clear that the killer is slowly working their way up to killing Laura herself.

I desperately wanted to like Eyes of Laura Mars, but there are so many problems with it that I just can’t get myself to it. To discuss the very real problems that exist at the heart of this film, I’m going to have to enter deep into spoiler territory. You should consider the rest of this review under a spoiler tag if you’d rather not have a 40+-year-old movie spoiled for you.

There are a number of things that get teased in Eyes of Laura Mars that never come to any real fruition. The first is when we’re told by Neville that several of the photographs in Laura’s upcoming book appear to mimic active unsolved murder scenes. The photographs are however many months old while the crime scenes are a year or two old. Laura’s explanation is that she gets ideas for things, and more and more, those ideas concern violence. These visions of crime scenes or her desire to duplicate crime scenes that she’s never seen is never really brought up again. It’s not even implied that, when we discover the identity of the killer, that the killer is responsible for those murders. It’s just…something that happens that points toward Laura having psychic abilities, but it goes nowhere.

When we finally discover the identity of the killer, there’s not much surprise. But even if we buy that plot twist, it doesn’t work out. The murders start before they should, given the identity of the killer. These things really have to be explained in the mind of the viewer (it can be worked out, but it takes some effort) rather than having a clear way to get there in the narrative itself. I don’t mind having to do some work, but I shouldn’t have to invent plot dynamics or create possible scenarios that occur outside of the narrative for that narrative to work.

The bones of an interesting story are here. Honestly, it’s closer to the bones of a decent mini-series if someone had the ability to flesh this out into four or five hours instead of about two. There’s enough possibility here and enough untapped ideas that this could be stretched out and given a lot more depth. As it is, though, it feels like the cast is wasted. Raul Julia shows up in a couple of scenes and is then essentially forgotten. Brad Dourif’s Tommy gets a little bit of development and is then just turned into a plot device.

Why to watch Eyes of Laura Mars: When else are you going to see Faye Dunaway in a John Carpenter script?
Why not to watch: As much as you want it to be good…it just isn’t.