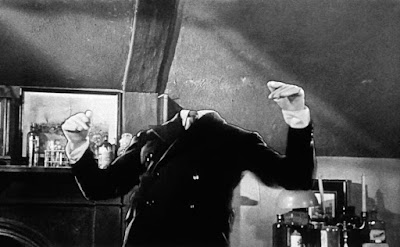 When you think of the classic Universal monsters, the one that tends to be forgotten is The Invisible Man. I think that might be because he’s the most human of those monsters. Frankenstein’s monster, Dracula, and Imhotep the mummy have all died in some respect and have come back to life. The Wolf Man and the Creature from the Black Lagoon are significantly non-human in some way. But Dr. Jack Griffin (Claude Rains) is just a guy who became invisible.

Still, he ranks. He’s got solid bona fides for being one of the classic monsters, in fact. First, he’s one of the earliest, coming fourth, and coming in the 1930s, nearly a decade before The Wolf Man and more than 20 years before The Creature from the Black Lagoon. Second, the film was directed by James Whale, one of the classic Universal monsters directors. Third, the story is based on a piece of classic literature; in this case, the H.G. Wells story of the same name.

The Invisible Man, much like the original story, doesn’t bore us with the science or with the discovery. We start with a mysterious, bandaged man arriving at an inn in the middle of the British countryside. He demands a room and privacy, which he is quickly given. The man, of course, is Jack Griffin, and the reason for the bandages is that Jack Griffin has found a way to make himself invisible. The problem is that he hasn’t discovered the antidote yet, which is why he has come to this quiet spot. Things don’t go well, though. He’s constantly bothered by the innkeeper (Forrester Harvey) and his wife (Una O’Connor). When he physically attacks both of them, a constable is called for and Griffin fully reveals himself.

Meanwhile, we do get a bit of backstory on what happened. Jack Griffin was a researcher working for Dr. Cranley (Henry Travers) and simultaneously romancing his daughter Flora (Gloria Stuart). He worked with a man named Kemp (William Harrigan), but also spent time working on his own at night. When Cranley and Kemp explore Griffin’s lab, they discover evidence of his research. That research included a chemical called monocane, which strips the pigment from everything it is used on. Tests done on animals also suggest that the chemical drives whatever takes it crazy.

So you guess where this is going, right? Jack Griffin is certainly invisible and he’s been driven mad by the chemicals he has used to create his invisibility. Realizing that invisibility gives him great power but also comes with limitations, Griffin flees the inn where he was staying and invades the home of Kemp. Griffin’s plan is to take over the world, figuring that a man who is invisible would have limitless power to acquire knowledge. But he needs a visible agent to do at least some of his work.

The problem for Kemp is that Griffin’s plan is pretty much literally insane, the sort of thing that would cause a lot of people to back off immediately. He plans to start things with a literal reign of terror, killing people around the country in various social classes to demonstrate that his wrath could fall on anyone. This reign of terror includes ideas like derailing trains and causing mass destruction whenever he can. Kemp’s problem is how to alert the authorities to the presence of a man in his house who could literally be standing next to him, hearing everything he planned and then killing him without warning.

The biggest problem with The Invisible Man is its length. As far as I know, it covers the bulk of the story, but at just a shade over 70 minutes, it ends just as things are starting to get interesting. This is a film that could probably handle shoehorning another 20 minutes into the plot, although it works very well as it stands.

Director James Whale dropped a lot of humor into his films, even those that leaned more toward horror. Here, not all of the humor works that well. The biggest issue here is Una O’Connor, who does nothing more than scream wildly at everything that happens around her. I’m certain that this is expected to be comic, but it really doesn’t work in any way. She’s annoying every time she is on screen, and this comes from someone who tends to like O’Connor’s particular stylings.

The most impressive part of the film is the special effects. These days, it’s easy to see exactly where specific camera tricks are done to make Griffin disappear or seem to be insubstantial. We can see where Claude Rains has been removed from the film. When a bicycle appears to be riding on its own, there’s an obvious track in the ground it is moving on. These are certainly functions of the time, but for the 1930s, they looked great.

In a lot of ways, this is the least of the Universal monsters as well as being the one most easily forgotten. It’s still worth seeing though, if only for the increasingly-manic performance of Claude Rains.

Why to watch The Invisible Man: The effects are surprising for the time.
Why not to watch: Way too short to build up any suspense.