The Next Ten Days 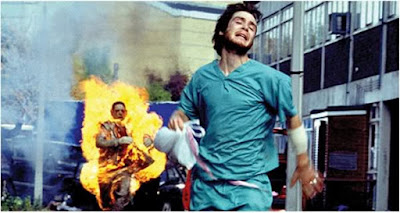 The same was true when I switched to Oscar movies. It's not a genre that generates a lot of Oscar buzz in general. Since the focus of this blog was never on horror movies, they've been something that I've been touching on in the margins. But I still do love them and still watch a lot of them.

Anyway, in 2014, I ended October with a bunch of horror movies. In 2015 and 2016, I doubled the amount, posting twice a day to put up more and more horror movies while still keeping the main focus of the blog on Oscar films. But I still watch horror movies, and more and more, I've been reviewing (but not posting) those that I watch. This means I have a large backstock of reviews that I've never posted.

So, starting tomorrow, I will be posting a great deal of that back catalog of mine. Over the next ten days, I will be posting four times per day. There will still be an Oscar post on the two Mondays and the Friday in the next week and a half, but the other posts will all be horror movies, showing up at regular intervals through Halloween. While some of these will be movies I've watched this month, most will be movies I watched last year or early this year.

Anyway, expect new posts from me starting tomorrow at 1:00 and 7:00, both AM and PM CST until the month ends. Oscar posts will go up at 1:00 PM on the appropriate days.